Poetry Review — When the Pipirite Sings 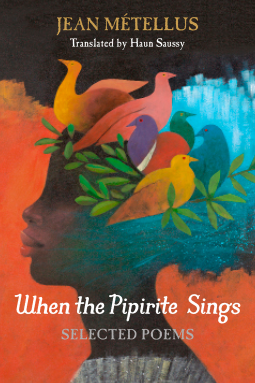 Jean Métellus was born in Haiti and initially educated in Haiti. He left his home country to continue his education and escape the Duvalier regime in 1959. In Paris, he studied linguistics and neurology. Metellus would not return to his homeland, but instead, he began to write poetry about Haiti. His attachment to Haiti is complex since he wrote about it from memory, perhaps a bit idealized, and wrote in French, not in Creole. Haun Saussy translation of the French to English captures the spirit of the poetry while keeping the form intact.

Metellus’ masterpiece “When the Pipirite Sings” opens the collection. There is an immediate feeling of the countries people and history. The slave labor and broken promises of freedom and prosperity run through the poem as well as the forced language and religion on a captive people.

When the pipirite sings the Haitian peasant has already crossed the day’s
threshold and forms in the air, one step behind the sun, the outline of a
crucified man embracing life
…
The Haitian peasant knows how to get up before dawn and bury a wish, a
dream

Poverty and slash and burn subsistence agriculture is represented.

Glimmers of hope grow in other poems.

Metellus captures the spirit of his homeland and its roots. Themes of slavery and African heritage, poverty, simple lives, and hope for Haiti run deep in all the poems.