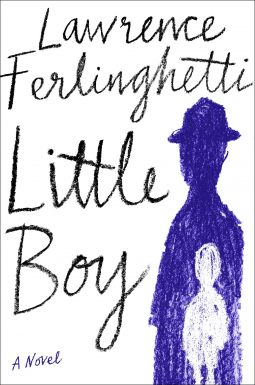 Lawrence Ferlinghetti is an American poet, painter, socialist activist, and the co-founder of City Lights Booksellers & Publishers. At 99 he is one of the last survivors of the Beat generation of poets and writers. Little Boy is semiautobiographical and begins with his childhood shuffling between guardians, service in World War II, and Paris. A long life blends the old and the new. An excellent mix of Google and Barney Google. Facebook gains mention along with the World Wide Web early on in the book. It is an unexpected mixture of ages but rather plain. The reader falls into a routine the begetting in Chronicles. Suddenly the text explodes into a Ginsbergesque rant. He calls on the poets of the past as one would call on the saints. He has anger:

The words flow smoothly, sometimes violently, but always with meaning and life. The words seem alive. Here is a man, on in his years, not calmly telling his life and experience to grandchildren, but raging refusing to go gently into the night.  Here is a man who saw the remains of Nagasaki and wants to remind us it can happen again.  Powerful, moving, a lifetime recorded on a hundred pages.