Book Review –When the Irish Invaded Canada: The Incredible True Story of the Civil War Veterans Who Fought for Ireland’s Freedom 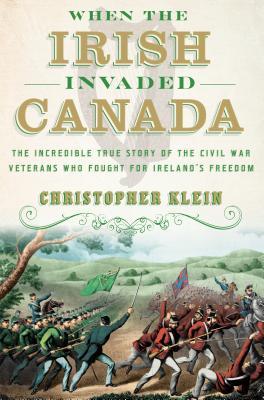 When the Irish Invaded Canada: The Incredible True Story of the Civil War Veterans Who Fought for Ireland’s Freedom by Christopher Klein is a history of a little-known war. Klein is a writer specializing in history, travel, and sports. He is a frequent contributor to the Boston Globe and History.com, the website for the History Channel and the author of three other books.

To many people, Ireland is a country whose struggle has been limited to British rule. The Irish, as a people, were involved in many western hemisphere conflicts. Bernardo O’Higgins led the effort for Chilean independence. John Riley and the St. Patrick Brigade fought with the Mexican army in the Mexican-American War while other Irish earlier fought to defend the Alamo. The Irish have a history of fighting for causes they believe in. One cause has always been freedom from British rule.

After the Civil War, Irish men on both sides of the lines joined in a plan to gain Independence from England by seizing Canada.  The soldiers’ connection to Ireland was much stronger than the color of the uniform they previously fought in. The circumstances of the times allowed this invasion plan to progress. Many believed that the potato famine was a result of a British plot which added to their determination. Americans were leary of England because of their support of the South in the Civil War. Americans also remembered the British came through Canada and burned Washington DC. Furthermore, the great influx of Irish to America created a powerful voting block influencing politics.

The attack obviously was not successful in freeing Ireland or overtaking Canada, but it did allow for a seemingly impossible event to occur and create new heroes in the Irish Independence movement. Klein writes a smooth flowing and well-documented history of the events leading to the invasion, the invasion, and its aftermath.  Klein’s writing style and the obscurity of the event almost seems like alternative history.  It was an almost perfect storm of events and circumstances that created this chapter in history.