Book Review — The Book of the Moon: A Guide to Our Closest Neighbor

The lunatic is in my head
You raise the blade, you make the change
You re-arrange me ’till I’m sane
You lock the door
And throw away the key
There’s someone in my head but it’s not me.
And if the cloud bursts, thunder in your ear
You shout and no one seems to hear
And if the band you’re in starts playing different tunes
I’ll see you on the dark side of the moon

Pink Floyd, Dark Side of the Moon, Brain Damage. 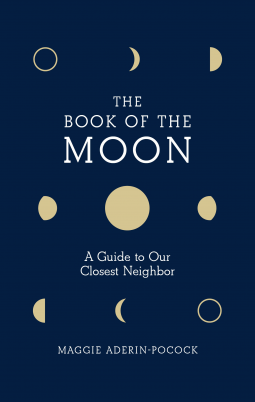 The Book of the Moon: A Guide to Our Closest Neighbor by Maggie Aderin-Pocock is a scientific and cultural examination of the moon. Aderin-Pocock MBE is a British space scientist and science educator. She is an Honorary Research Associate in University College London’s Department of Physics and Astronomy. She studied at Imperial College London, graduating with a BSc in physics in 1990 and completed her Ph.D. in mechanical engineering.

Growing up I looked at the moon frequently through a 45x refractor. The moon was much more interesting than the bright spots that were the planets. On cold nights the craters looked sharp and clear. I lived in the city and never appreciated the light reflected by the moon. In the Marines, I found out that in the middle of nowhere (outside of light pollution), I could read by the light of the moon and under a full moon navigation was possible without additional light.

Aderin-Pocock writes almost poetic science about the moon. She presents facts and figures and science in a way that is inviting. Her writing is reminiscent of Carl Sagan in that way that the reader is embraced by the information rather than intimidated by it. It is not just the science; the moon is a cultural icon. Cat Stevens sings about being followed by a moon shadow. Creedence warns of a Bad Moon Rising. Neil Young pays tribute with Harvest Moon. The moon played a role in movies and in many of our childhoods:

Even a man who is pure in heart and says his prayers by night, may become a wolf when the wolfbane blooms and the autumn moon is bright.

Perhaps adding more meaning to the word lunatic. Of course, not all of that the moon inspired is good particularly the terrible poetry and songs that rhyme moon and June. Calendars were set in lunar months and were used by many cultures. Although the sun is essential most early civilizations had moon deities. The moon determines tides for sailors and signaled seasons for farmers.  One can record the passage of time by its phases.

Aderin-Pocock presents the reader with a love story for the moon.  She gives the science and then reaches beyond the science and offers the more romanticized history of the moon and its place in human thought and lore. A combination of beauty and science.