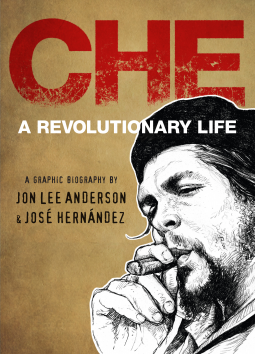 Che, thug or hero? Many in the West are quick to say, thug. Che was a true believer in liberating the underclass and freeing the countries from economic domination. He was critical of the Soviet’s system of privilege and critical of those in post-revolutionary Cuba. As far as being a thug he was quite tame compared to the US supported dictators Somoza, Duvalier, Trujillo, and later Pinochet and Duarte. Support for Somoza loyalists brought more violence in Nicaragua but was supported by the US as of being of the same blood of our founding fathers –the Contras. The United States has a long history of promoting dictatorships instead of democracy.

Che watched the overthrow of the legally and freely elected government of Arbenz in Guatemala. The US supported the overthrow and even participated in it. What good is a northern neighbor who speaks of democracy, but overthrows it at the same time? He had good reason not to trust the US.

Addendum to the Graphic Biography:

I have just received the graphic biography edition of this book illustrated Jose Hernandez from Penguin-Random House.  As much enthusiasm I had for the original text biography,  I found it difficult to imagine that an illustrated biography would improve on the original, but it has.  The illustrations add even deeper feeling to Anderson’s book. Che is seen as a person and not just a symbol or mythical historical being.  He was a man who saw a better world, but many in the West saw him as the enemy. This is quite possibly the best use of the “graphic novel” concept as an educational tool.

Revolution, however, possessed Che.  He lived and breathed it.  He worked untiringly to bring a sense of justice to the oppressed.  He differed from many in that he was not power hungry.  Brutality came from seeing those who lost their commitment or in frustration at those just hoping someone else would free them.  He was driven and expected those with him to be equally driven. For those who expect a “graphic novel” style biography to lose it depth and detail, they will be sorely disappointed.  This edition is a welcomed addition and will perhaps bring more people into the discussion on the real Che and his role in history and not just the myths around him.  He was much more than a thug or a face on a t-shirt; he was a force for change and also very much so human.