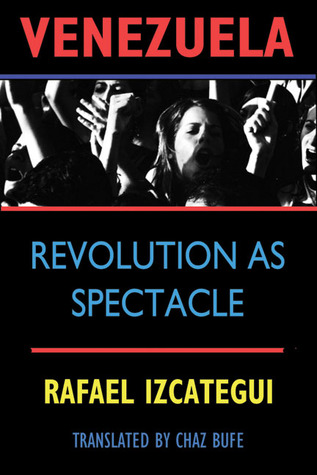 Venezuela: Revolution as Spectacle by Rafael Uzcátegui examines Venezuela’s Chavez era from the inside. Uzcátegui is a libertarian which unlike the US term means anarchist or complete freedom. He is critical of supporters and critics of Chavez.

The problem with words is that definitions become slippery at times. Chavez was a fascist. Chavez was a socialist or communist. Chavez was a left-wing dictator. Uzcátegui calls him a populist which is as good of a definition or even better than the other terms. Dictators in the Cold War were either left wing or right wing depending on where their support came from. The governed in precisely the same fashion with left and right merely used as “team” identifiers. Jean Kirkpatrick stated the difference was that right-wing dictatorships were more easily converted to democracies. Populist governments have their place in history and in current governments. Tell the people what they want to hear. Deliver on some of it. Other items blame the other party or an enemy. This keeps the masses active in supporting the government. Jesse Helms probably did more to secure Castro’s power by his hatred of the man and his government than cause any harm in Castro’s popularity. Castro played Helms right back on to the Cuban people as a threat from the US.

Chavez used the same US threats to help secure his power and keep him in power. Uzcátegui examines indicators like murder rate, labor unions, militarism, and the new Consitution. Restrictions on education, labor, and political dissent were prohibited in the constitution but existed and/or expanded under it. Oil was still leased out to multinationals instead of being used to better the country. Changes in the country proved to be more restrictive than liberating. The left in the United States jumped on the Chavez bandwagon thinking this would be good socialism much like they did with Stalin in the 1930s. Examining the surface does not tell what is going on beneath the veneer.

This book does have a role outside of Venezuela as a study in populist movements. Most movements follow some form of nationalism and an enemy inside or outside of the state. Propaganda takes the place of news and generally is not challenged. Rousseau’s General Will comes into play as an anti-democratic force. The government is popularly elected, and that government is the will of the people. If you disagree with the government or its leaders, you are a minority going against the majority. That makes you anti-(insert country name). If you are part of an opposition party that makes it almost treasonous. There are several times in US history where populism has risen and quickly disappeared. There are even arguments that the current administration is not conservative but populist. The ordinary worker against the elite (even though the one leading is not a worker, but a billionaire) is common refrain today — the elites on the coasts vs. the workers in the heartland.

Uzcátegui through documenting the Chavez regime not only supplies a history but it also provides a blueprint of populist governments. This book was published in 2011 during the Chavez regime.  It is translated by Chaz Bufe who not only translates it from Spanish but also does additional editing to the text and source material. He claims just to consolidate and remove nonexistent websites and content. A fascinating history and explanation from the inside of Venezuela of the workings of populist regimes .