Good smells exude from crumbled earth.
The rough bark of humus erupts
knots of potatoes (a clean birth)
whose solid feel, whose wet inside
promises taste of ground and root.
To be piled in pits; live skulls, blind-eyed.
~Seamus Heaney, “At a Potato Digging” 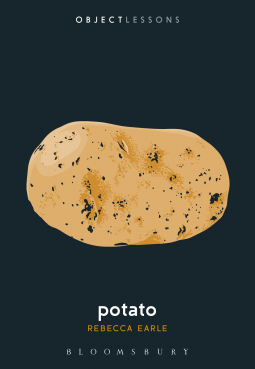 The potato is probably the world’s most underappreciated food. In South America, it did not get the ceremony of corn, but it did travel the world and quickly after they were discovered. According to the United Nations, the potato is grown in every country of the world (five nations, however, provided no information). Potatoes thrived in South America but failed catastrophically in Ireland due to a blight. South American’s crops, however, were not monocultures like the Irish, several varieties were grown together. Just about every culture has potato dishes from the Americas, through Africa, the Middle East, and China. China now is the largest producer of potatoes in the world together with India they account for 1/3 of the worlds potato production. Even Saudi Arabia produces close to half a million tons of potatoes.

Potatoes have been credited with growing community, self-sufficiency, tax evasion, evil (since they are not in the Bible), and hypertension, Rebecca Earle’s Potato shows the potato in its historic role in the west and now around the world. The potato proves to be a staple with little fanfare, except for a few poets and painters, despite its worldwide popularity.