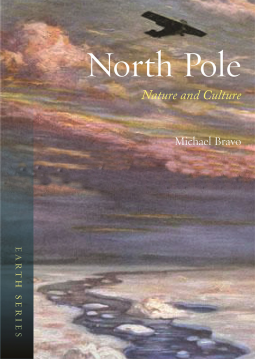 North Pole: Nature and Culture by Michael Bravo is a history of the North Pole from ancient to modern times. Bravo is the University Senior Lecturer and Fellow of Downing College Convenor of Circumpolar History and Public Policy Research, Scott Polar Research Institute. Member of the Department of Geography’s Natures, Cultures, and Knowledges Thematic Research Group. Research Associate in the Department of the History and Philosophy of Science.

I picked this book up thinking it would be a geography or environmental studies book. Instead, it is a detailed history of the North Pole. From the ancient Greeks to the Induits, the pole proved mysterious place. It could be an Eden or a window to the firey interior of the earth. Even 19th-century writer Mary Shelley thought of it as a mysterious place to start and end her book Frankenstein. The pole affected map making too. The Cordiform projection of the world was widely used after the Middle Ages its heart shape not only presented the earth as the heart of the universe, it also kept the pole area intact to display what may be there.

The North Pole is the axis that the earth spins on which is different than the magnetic north pole that lodestones and compass needles point to. Even the North pole itself does not seem like a fixed location. Since there is no land under the ice sheet at the pole, the position on the ice appears to move; there can be no permanent marker on the ice.

Early explorers had a difficult time fighting against the elements and organizing logistics in reaching the pole. The race to the pole was something almost mythical; it rivaled the much more economically important Northwest Passage. Today GPS, lightweight sleds, and other technology make reaching the pole easier. In fact, every year there is a marathon ran at the North Pole. It is a place that is much more accessible than the South Pole. Bravo presents an excellent history of the North Pole and the people who lived there, explored there, or dreamed of the pole.  The book is nicely illustrated with maps, portraits, expedition photos, and even newspaper cartoons.

One response to “Book Review — North Pole: Nature and Culture”