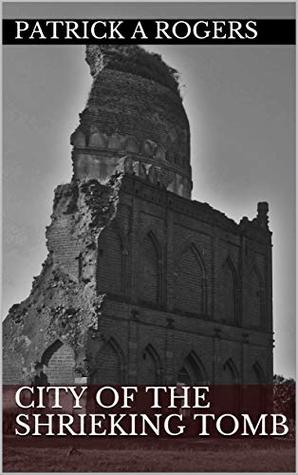 City of the Shrieking Tomb by Patrick A Rogers is a gripping tale of horror. Rogers opens the book with an excerpt from “The Unseen Nooks of India” giving a history of the region and surrounding lands and mentions a city where foreigners are not permitted. There is also a link if you have information concerning this city of Humayunpur. The story involves a photographer named Rick who is on his way Bidar to photograph Islamic architecture. Stuck for the day he manages to meet Awaz who informs him that the bus he is taking will go to Bidar after stopping in his hometown of Humayunpur.

Faster than you can say Necronomicon, Rick, through events beyond his control, finds himself stranded in Humayunpur and a guest of Awaz. Awaz is a kind man but often speaks in riddles or in circles. The city that does not like foreigners certainly does not like people taking pictures of their town, especially of Humayun Ka Maqbara — an ancient mosque in ruins. Humayun Ka Maqbara is off limits to all because it is dangerous. The danger lays in bumping your head is the best answer a frustrated Rick can discover. Awaz receives permission through the local iman for Rick to see, but not photograph Humayun Ka Maqbara. Rick become deeply obsessed with the mosque.

Rick faces a challenge as the city seems to get weirder and even cursed the more he investigates. The deeper he looks, the more he wants to break his promise of no pictures. The cover of National Geographic or keeping his word and leaving the town becomes an internal battle. Awaz and others try to persuade Rick to go but each clandestine discovery pulls Rick closer to the secret of the city. Very much a Lovecraft inspired story where the darkness and despair grow through the story leaving one in an irrational world that slowly evolved around him or her with little notice. Very well done.

One response to “Book Review — City of the Shrieking Tomb”