Book Review — The Fourth Reich: The Specter of Nazism from World War II to the Present 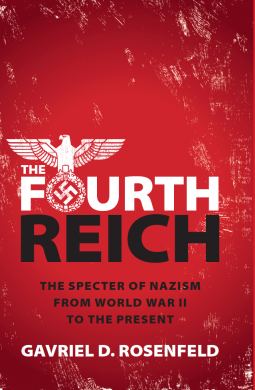 The Fourth Reich: The Specter of Nazism from World War II to the Present is an incredibly detailed history of the concept of the Fourth Reich. The fear of the Nazi return to Germany was real after World War II. The war did not end suddenly, and resistance continued even after the German surrender. The partition of German was also a result of the fear that any German government would lead to a return of the Nazis and war.

The Fourth Reich became boogeyman in post-war history, and its meanings were varied. A German Jew, Georg Bernhard, helped draft the constitution for the Fourth Reich. His Germany was committed to peace and equality. Reich in its most basic sense means realm, and it had no adverse connotation before WWII. When West Germany was allowed self-government in 1949, it chose “Federal Republic of Germany” instead of Reich. Naming itself a republic, however, did not stop the elements on the right from wanting to reestablish a Nazi-like regime.

The idea of a new German Reich rose and fell in public view. By the 1970s, West Germany was seen safe enough that American entertainment took hold of the Nazi return. The Boys from Brazil and The Odessa File became hit books. Who could forget the German dentist in Marathon Man? There were real and fictionalized stories of Nazi hunters. There was also a rise in Neo-Nazism in the US during the 1970s making national news with the Stokie Supreme Court case.  Today, the threat seems more serious as right-wing parties are gaining strength in Europe.  In the US, the far right wing and the far left clashed in the streets of Charlotte and other cities.  Internet publications like The Daily Stormer and Breitbart spread the word to a worldwide audience.

Author, Gavriel D. Rosenfeld is Professor of History and Director of the Undergraduate Program in Judaic Studies at Fairfield University.  He received his Ph.D. in History from UCLA in 1996.  The Fourth Reich is a detailed history of a movement that has not materialized.  Over one-third of the book is reserved for documentation and source material.  An extremely well-done and well research history.

2 responses to “Book Review — The Fourth Reich: The Specter of Nazism from World War II to the Present”