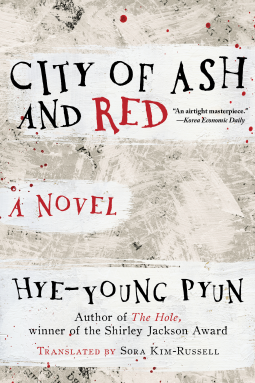 City of Ash and Red is a Korean story that strikes fear and uneasiness into the reader. The unnamed lead character and narrator works for an extermination company. He’s not the best employee but gets to work at the big office in Country C. Countries and cities are represented by single letters which are not shorthand but signify places unknown to the reader. The reader will not think that country C is North Korea, Poland, or Canada; it is someplace the reader has never been. There is a sense of being lost and to compound that feeling the character also feels lost and disoriented. He loses all contact with his home country. He also learns he is suspected in the murder of his ex-wife. The book takes the reader on a dark, twisting course. In a city where trash piles high, rats thrive, and swirling mists of sprays that are supposed to control the spread of an epidemic cover everything a foreigner must find his way out or in.
Translator Sora Kim-Russell does an outstanding job in translating the story to English while keeping the original feel and intent of the story.  Horror seems to have different flavors in different cultures.  Part of the stories appeal is that is outside of the Western or American norm.