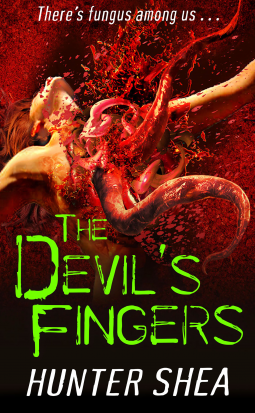 The Devil’s Fingers is the third book in the One Sized Eats All series. I have previously read and enjoyed Rattus New York. Shea has a talent for taking the shock of a 1950s horror movie and transposing it into the present. Here, like in a 1950s horror movie, there is a group of young adult friends in the forest to release the ashes of one of characters father. They notice some strange “plants” that one character, who happens to take botany in college, recognizes as Austrailain Clathrus Archeri or Devil’s fingers — a fungus. Things then get very strange as the fungus seems to be much more than run of the mill Devil Fingers. It is a creepy enough fungus, and the reader can see it in action on YouTube.  The videos of the fungus hatching from their spores are no doubt horror-inspiring, but the mutated version in the story is far worse.

Shea weaves together a great horror tale from something quite harmless although relatively foul smelling and transforms it into terror.   Very well done and a surprisingly a short and easy read.