Book Review — The Best of Peter Egan: Four Decades of Motorcycle Tales and Musings from the Pages of Cycle World 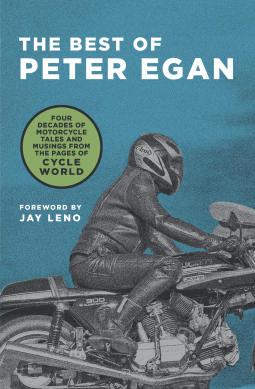 The Best of Peter Egan: Four Decades of Motorcycle Tales and Musings from the Pages of Cycle World by Peter Egan is the magic of motorcycling. Egan is an American writer specializing in automotive and motorcycle journalism — widely known for his monthly car-related column, “Side Glances,” in Road & Track magazine as well as his monthly motorcycle-related column, “Leanings,” in Cycle World magazine — as well as road tests and occasional features in both magazines. Egan’s columns are chiefly autobiographical and anecdotal. He has written extensively about road trips, including detailed accounts of the failings of the vehicles, interactions with the people he travels with and those he meets.

I was sixteen when I bought my first motor vehicle. It was a nonrunning 1968 Triumph Trophy 250. I continued to ride motorcycles for the next thirty years before giving it up for the corporate look and sensibility. Before giving it up, I spent several years as a motorcycle mechanic while finishing college and graduate school. From my early years of riding, I was a reader of Cycle World, and it did take me a little while to discover Eagan’s column, I read Cycle World for the pictures. However, once I started, I was hooked on his writing.

If you don’t ride, it’s hard to describe the feeling and experience of riding. “If I had to explain, you wouldn’t understand” is a familiar refrain from motorcyclists and bikers. The thing is, Peter Egan can explain it, and you will understand and find the experience enjoyable. Egan’s attachment to British motorcycles really appealed to me. I owned five Triumphs and a BSA. With ownership of a British bike, one gets to enjoy all the charm that comes with the bike like its uncanny ability to know when you are at the midway point between home and your destination to suddenly stop running for undiscoverable causes. Egans published his first story in Cycle World is about a trip to the west coast on a Triumph with his wife. Anyone who owned an old Triumph knows how the journey ends. He was told he should have ridden a BMW instead. He said it would not have been the same. BMW did not offer the challenge. I owned three BMWs and will attest to their supreme dependability, but the machine is so refined that it sometimes doesn’t feel like a motorcycle.  As Egan would later say, after selling that story to Cycle World, would Cycle World have bought a story titled, “Young Couple Successfully Reaches West Coast on Reliable German Motorcycle”?

I could also relate to Egan’s stubbornness. Lousiana chickory coffee too expensive in Wisconsin? Ride down to Lousiana and pick up it up your self. This trip was less eventful on a Honda but mission accomplished. When you ride a motorcycle, you have a unique ability to justify trips that are really not in your best interest. I once rode 60 miles on a Triumph in 20 degree (-7C) weather to take my LSAT; not one of my best decisions, but a good story nonetheless.

Egan’s writing over four decades includes some great motorcycles (many of them British) and some trips that inspire tourism. The reader is taken to the Isle of Man and Ireland. There are also maintenance tips including how to change your oil without making a huge mess of it.  Over this last year, I came back to motorcycling, and I was surprised to see that Egan wrote about my current motorcycle a KLR650 (then KLR600) in the 1980s.  If you can only have one bike, get one that can do most everything you need.  Perhaps that bit of advice stuck with me all these years along with it being easy on maintenance, carbureted and not fuel injected, and not screaming for flashy accessories and modifications.  Still, that does not keep me off of Craig’s List or researching another bike.  Do I need another motorcycle? I’ll let Peter Egan explain that.

3 responses to “Book Review — The Best of Peter Egan: Four Decades of Motorcycle Tales and Musings from the Pages of Cycle World”