Book Review — The Call of Cthulhu and At the Mountains of Madness: Two Tales of the Mythos 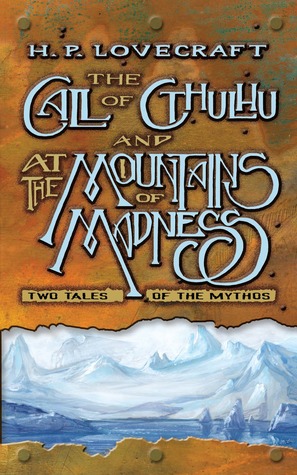 The Call of Cthulhu and At the Mountains of Madness: Two Tales of the Mythos by H.P. Lovecraft are two of the author’s most popular stories. Lovecraft was one of the first true American horror writers, and although he was not extremely popular during his lifetime, his work has gained acceptance and a large following. His biography describes his writing as: deeply pessimistic and cynical, challenging the values of the Enlightenment, Romanticism, and Christianity. Lovecraft’s protagonists usually achieve the mirror-opposite of traditional gnosis and mysticism by momentarily glimpsing the horror of ultimate reality.

This Dover publication brings together two of Lovecraft’s more famous works. The Call of Cthulhu was written in 1926 and creates the Cthulu Mythos which will eventually define the writer. Cthulhu, a terrible creature, is described as:

A monster of vaguely anthropoid outline, but with an octopus-like head whose face was a mass of feelers, a scaly, rubbery-looking body, prodigious claws on hind and fore feet, and long, narrow wings behind.

Its description in ordinary words creep into the reader’s mind and form a vision of horror. The horror exists in the descriptions and settings rather than in a special effects type beast. The reader is invited to experience his or her own form of terror. Lovecraft uses the reader’s own imagination as a tool in his writing.

At the Mountains of Madness, the reader is introduced to a different type of terror. Working in Antartica a deep feeling of isolation develops into a fear. Missing equipment and bodies of unknown creatures make the original fear of separation seem almost pleasant. Need more terror? The Necronomicon is mentioned which is a story in itself. It is a fictional tome which had its own history written in another story.

Lovecraft art was creating a terror in the reader’s mind. He plays on fears and forbidden knowledge. He establishes creatures that haunt the mind and threaten humankind in much the same way a human would intimidate an ant. There is a sense of panic and helplessness. It is not shock and gore of modern horror but a psychological awe that invades consciousness. Although the stories were both written over eighty years ago, they still have the same effect. The times may change but what triggers fear in the mind has remained the same. The potency of these stories defies time.