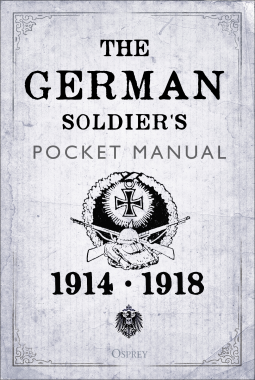 The German Soldier’s Pocket Manual: 1914–18 by Stephen Bull is an examination of changes in the German army during WWI. Bull was Curator of Military History and Archaeology for Lancashire Museums, with responsibility for local regimental collections. He has worked at the National Army Museum and BBC in London and has also appeared in the TV series Battlefield Detectives. He has written numerous articles for specialist journals, including a number on the weapons and tactics of the First World War. His other books include several Osprey titles on the tactics of World Wars I and II.

Soldier’s manuals may not seem all that important, but for those who carried them, they represent critical information. The manual/guidebook I had in the Marines covered everything from fighting positions, fields of fire, first aid, movement under fire, and weapons. It was something a Marine could fall back on. It was a study guide and a reference book. If one never handled an M60 one could find all the pertinent information in the guidebook.

The German Pocket Manual is a collection of updates and new information on war fighting for German soldiers. The First World War did not progress as planned for the German army. The Schlieffen Plan ran into snags and the what was meant as a rapid, coordinated invasion ended up bogged down in the trenches. Direct fire artillery was replaced with indirect fire artillery. Attacking entrenched troops was different than the open battlefield. Grenades became an vital weapon as well as machine guns. Feild fortifications also changed and were designed with different purposes.

Bull provides an introduction and presents German war-fighting plans at the start of the war and presents documents translated by allied forces. Some items like the spade or entrenching tool were essential to soldier’s lives in the field. The tool was used for more than just digging trenches.  Other items like the “concentration charge” seemed much less practical. The concentration charge was a stick grenade with six additional charges attached to it. The idea of creating a weapon with more bang was offset by the awkwardness of throwing the heavier weight on an already unbalanced stick. Bull provides the reader with primary source material from both German documents and eyewitness ally accounts.