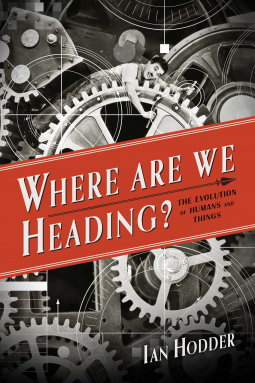 Is Human Evolution Directional? by Ian Hodder is the study of man and his relationship with what he creates. Hodder is an archaeologist and professor of anthropology at Stanford University. His most recent books are Entangled: An Archaeology of the Relationships Between Humans and Studies in Human-Thing Entanglement.

This is a book not about the biological evolution of man, although some of that is included in why we have small teeth and weak jaws, but of man as a species. Comparisons are made between man and other animals such as beaver dams and manmade dams. This is not only discussed in purpose but also in reaction and the effects of the completed project. Most of the discussion concerns man and his dependence on things and things that are dependant on man. As Hodder digs deeper, he shows that there is an entanglement between man and things.  The connection of Christmas tree lights in America and car production in China is one example used in the book.

There are also interesting discussions of wheat and cotton, and they have evolved from in production and the effects of technology.    Other items are less organic like the QWERTY keyboard design.  Its design was created so that the arms would not jam when typing letters that are physically too close to each other.  There are more efficient designs and not many people still use manual typewriters, but QWERTY stayed because it became the standard — taught in high schools, taught in secretarial schools, standardized all makes and models of typewriters.  It may not be the best design but it would be nearly impossible to change it today.

Hodder makes a compelling case for the entanglement of man and things.  I can see this in everyday America. We make cars for transportation.  We design cities to be car friendly.  We widen roads to allow more cars.  We raise speed limits so vehicles can move more quickly.  However, in the process, we find ourselves dependant on cars.  Suburbs, urban sprawl, housing communities isolated from businesses are byproducts. If we don’t have a car, we become stuck.  Many areas do not have sidewalks, public transportation, or bike lanes.  We created a system that system that ties our success to the success of the flow of automobiles. That flow also creates environmental concerns.  Our solutions are not effective. We build hybrid and electric cars to ease our dependence on fossil fuels, but many areas electricity is produced by burning coal.  So an electric vehicle is essentially a coal-burning vehicle.  This simple analogy runs far deeper when we include petroleum production, automobile production (which includes steel, plastics, and rare earth elements), changing the landscape/environment by building new roads, and removing the habitat for other animal life. Although it may seem to most that we control our destiny as a species by building, manufacturing, and changing the environment, we have become dependant on the things we make, and they may guide our future more directly than we thought possible.  The deeper we go the more we see our future entangled with and directed by the things we make.