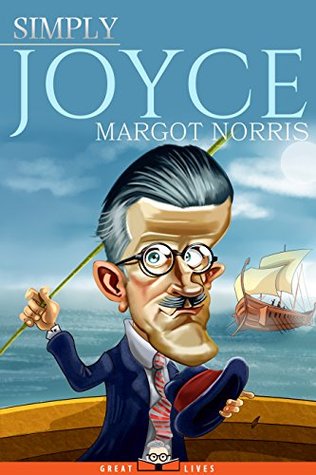 Simply Joyce by Margot Norris is an examination of Joyce and his works. Norris is Chancellor’s Professor Emerita of English and Comparative Literature at the University of California, Irvine, where she teaches modern literature. She is the author of four books on the works of James Joyce: The Decentered Universe of ’Finnegan’s Wake’, Joyce’s Web: The Social Unraveling of Modernism, Suspicious Readings of Joyce’s ’Dubliners,’ and Ulysses, a study of the 1967 Joseph Strick film on the novel.

Simply Joyce is more than an introductory biography of James Joyce. It is an examination of his work put into the perspective of his life and experiences. Norris also puts James’ work into the context of the times. Modernism is not something that was readily accepted in either art or literature. Even among his peers, his work was not always readily accepted. Virginia Woolf originally recorded in her diary:

I finished Ulysses, and think it a misfire. Genius it has I think; but of the inferior water. The book is diffuse. It is brackish. It is pretentious. It is underbred, not only in the obvious sense, but in the literary sense.

Later in the Common Reader she who be less critical and called Ulysses an important work no matter how difficult or unpleasant it may be. It did undoubtedly influence Woolf’s later work — The Voyage Out compared to To The Light House. D.H. Lawrence was also caught up in the hype over Ulysses and wanted his publisher to get him a copy in the US even though it was banned for impure and lustful thoughts. Joyce is a unique writer in the period although his Ulysses is credited with the rise of modernism he remained distant from Bloomsbury and their circle of friends.

Norris takes the reader through Portrait of an Artist as a Young Man, The Dubliners, Finnegan’s Wake, and Ulysses chapter by chapter and explains not only the text but its context in relation to both Modernism and to Joyce’s’ life. Although not meant to be a study guide, it is a nice companion book to the novels as I am discovering in my rereading Portrait of an Artist.  The story by story examination also helped explain the source of The Dubliners‘ short stories.  I did not read much of the Finnegan’s Wake chapter as that book is on my to read list for this year and would like to compare my impressions to Norris’ writing.  I will revisit it when I do read the novel, seeing how helpful Simply Joyce has been while rereading Portrait of an Artist.

Simply Joyce is one book in the series of Great Lives book covering the lives and works of people from Machiavelli to Hitchcock and my favorite Virginia Woolf. The series provides more depth than the typical overview of author’s and their work.  Simply Joyce gives depth and setting to the author’s work.  Norris’ expertise in Modernism and Joyce’s works makes this edition very readable and informative.