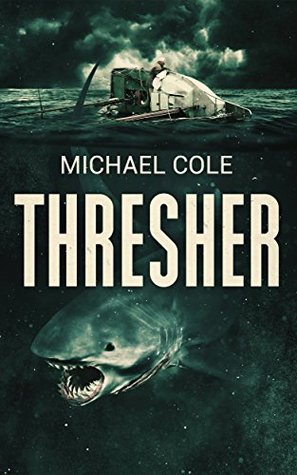 Another shark story with some twists. Some stereotypes exist through the story. There is the alcoholic cop, Riker, and his caring partner. An acting mayor on a power trip. A police chief from a crime infested city looking for a peaceful retirement. There is also a pair of marine biologists. A hurricane and an accident with a secret government project create a colossal thresher shark. The thresher that is usually small and does not interact with man; here man’s tinkering with nature creates something unforeseen. Suddenly the shark attacks anything it senses in water either as food or as a potential threat.  The acting mayor does not want the boat race the town is hosting threatened in any way and the best way to keep things under wraps is with bad guys. There are a few similarities with Jaws, and the Chief and Riker are both from the city of Alton (perhaps a tip to author Steve Alten).

The characters are pretty simple, and the dialog isn’t the best. It’s easy to see who the good and bad guys are and there are really no surprises characterwise. Using a thresher shark instead of a great white is a nice change. As with most shark books, there is a little bit of science, not much, and some environmental concerns. This book, however, is more of a creature book. It reads like a good B movie would play and not meant for the reader to think too hard about the plot. It is intended to be enjoyed, and it succeeds in being entertaining.