Book Review — Technomodern Poetics: The American Literary Avant-Garde at the Start of the Information Age 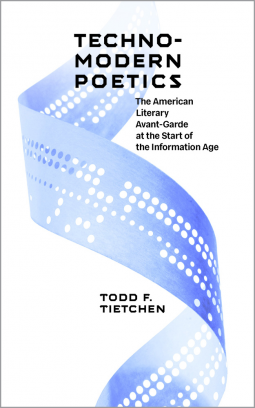 Technomodern Poetics: The American Literary Avant-Garde at the Start of the Information Age by Todd T Tietchen is the examination of the change of American poetry in the post-WWII period. Tietchen is associate professor of English at the University of Massachusetts, Lowell. He is the author of The Cubalogues: Beat Writers in Revolutionary Havana. He holds a Ph.D. in English from the University of Washington.

I find poetics to be a difficult subject but love poetry. Poetry is like watching the night sky and taking it all in. One does not need to understand astrophysics to enjoy the night sky. Poetics is the astrophysics of poetry. It is the reason and the why of poetry. It is why poetry is written in the form that it is in. My experience with poetics has not been very successful. I decided to give it a try again with a period that I am familiar with in other ways.

Charles Olson’s “The Kingfishers” is used to set Tietchen’s thesis. It is a poem that breaks the conservative mold of American poetry. It ignores traditional rhyme, line length, and creates packets of information for the reader. He presents the failings or the collapse of Western civilization. The poem closes with:

I pose you your question:
shall you uncover honey / where maggots are?
I hunt among stones

Civilization has rotted away and the Olson the “archeologist of morning” uses words as tools to move things. Morning could mean the new day or more probably its homonym.

What caused the sudden change in American poetry. No doubt mechanized warfare of the WWII and the atomic bomb being dropped on Japan had a role in the shift. Also, technology also presented a different way as ENIAC was used to study artillery trajectory and used to explore the possibility of the hydrogen bomb. Technology had taken a dark turn. Throughout the book, Tietchen builds on the idea of intrusive technology and associates it with fascism. People were expected to fit into a neat mold much like traditional American poetry. Kerouac’s short story “cityCityCITY” is also used as an example of the coming dystopia.

If one thinks the ideas presented may be far-fetched one just needs to look elsewhere in society at the time. Science fiction and horror movies of the 1950s tended to make a hero out of the strong individual and a villain of the collective. In Cold War politics, the Soviet Union was the machine and its people simply cogs in that machine.  America and the West were about the individual unless he or she caused waves or moved outside the lines.  The illusion or freedom or comparative freedom was the ideal.  Today cell phones can track your position anywhere there is cell service, yet people happily volunteer and pay for this potential loss of privacy.  The internet opened a world of information to the public, but everything you look at or read can be tracked.  Your library searches can also be monitored.  You are free to look, but if you look at some things, you might have to answer a few questions.

Technomodern Poetics examine the roots of dystopia through technology.  Earlier writers wrote on paper and typed out their final copies.  In the postmodernist age, the typewriter became the primary tool.  Kerouac typed directly to a scroll to create a primitive instantaneous recording of the author’s thoughts. O’Hara wrote his poems on lunch walks. There was an attempt to instantly capture the ideas of the writer.  Poet’s at the time moved outside of the lines. Ginsberg and Lenore Kandel would face obscenity trials for their work.  Technology could be used to create and to control.  Today writers are free to self-publish their works. Reviewers can criticize and review works but are trapped inside of lines.

What I type here are my thoughts and work and can reach an unlimited audience, but I do not have control of the information. If I stay within rules established by WordPress, if I do not violate the terms of service with my internet provider, if I do not break any laws or advocate the overthrow of the government, if I color between the established lines I am free to do what I want.  If the lines remain wide, we do not notice the cage around us. Technology, in commerce and politics, is what can close those lines.  The poets and artists of the post-war period saw this, and it scared them; today we seem to be numb to it.   One must remember the words of Michel Foucault, “There are forms of oppression and domination which become invisible – the new normal.”