Lithuania! My homeland! You are health alone.
Your worth can only ever be known by one
Who’s lost you. Today I see and tell anew
Your lovely beauty, as I long for you. 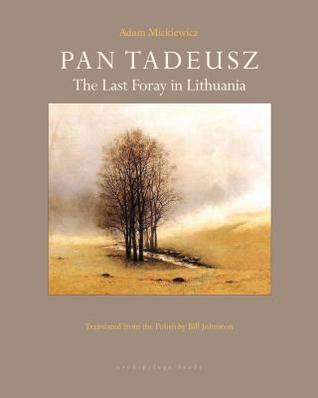 Pan Tadeusz: The Last Forray Into Lithuania by Adam Mickiewicz and the new translation by Bill Johnston is an epic poem about the divided Poland and Lithuania. Mickiewicz was a Polish poet, dramatist, essayist, publicist, translator, professor of Slavic literature, and political activist. He is regarded as the national poet in Poland, Lithuania, and Belarus. Johnston is a prolific Polish language literary translator and Professor of comparative literature at Indiana University. His work has helped to expose English-speaking readers to classic and contemporary Polish poetry and fiction.

Pan Tadeusz is a poem for those interested in Polish/Lithuanian history or heritage. Most Americans would know little of Polish history except for the opening of World War II. Those who remember the Cold War will recall, despite Gerald Ford’s assertion, that Poland was under Communist control and the US does not recognize the incorporation of Lithuania into the USSR. Poland has lived a rather quiet history as a nation for those living today. Poland was a historically a cultural and military territory. Part of the problem also comes with what is Poland. Its size has varied, and it ceased to exist as a nation more than once. My great grandmother’s immigration papers said she was born in Russian occupied Poland claiming Polish as her nationality. With borders that changed so often, it is not hard to imagine how one person could be the national poet of three different countries.

Pan Tadeusz is a rather long poem covering five days in 1811 and two days in 1812. It contains a bit of a Shakespeare theme (Romeo and Juliet) and a bit of Les Miserables’ to the barricades. Johnston provides a detailed introduction which helps clarify regional realities of the time and a translation that remains true to the original intent including the humor. The verse flows well, and much of the rhyme remains in place, not every line rhymes, but there is enough to keep the read locked into the rhythm of the poetry. There does not seem to be any forced wording in the translation; it is easily readable.

Johnston’s translation of Pan Tadeusz brings the Polish classic in an enjoyable form to the English language readers without losing the original intention and form. Both the author and translator include notes characters, locations, as well as translations where words don’t seem to have a word for word replacement. An exceptionally well done original work and rendering.

One response to “Poetry Review — Pan Tadeusz: The Last Forray Into Lithuania”