Book Review — A History of America in Ten Strikes 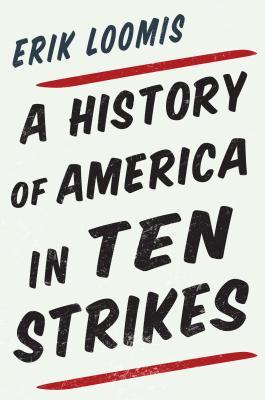 A History of America in Ten Strikes by Erik Loomis is a study of American history told through the labor movement. Loomis is an assistant professor of history at the University of Rhode Island. He blogs at Lawyers, Guns, and Money on labor and environmental issues past and present. His work has also appeared in AlterNet, Truthout, and Salon.

History is long, and memory is short. Three generations ago organized labor and collective bargaining were celebrated and credited with the growth of the middle class. Living wages and the benefit of buying American made goods drove the popularity of unions. Today unions are generally demonized and blamed for sending jobs overseas. Earlier unions were identified with early twentieth-century communism. On the Waterfront (1954) left moviegoers cheering for Brando as the dock workers banded together. Workers once united could negotiate for fair wages and benefits. Organization made workers something more than replaceable cogs in the machine.

In examining strikes in their context of history Loomis demonstrates the validity of certain strikes and the rise and fall of unions in America. Two strikes that I recall are covered in the book. The Air Traffic Controllers strike and the Lordstown Strike. Growing up in Cleveland strikes were part of the regular news from local steel strikes to auto worker strikes. Somewhere in the late 1970s, organized labor began to fail. Japan and Europe recovered from WWII and union demands came to be perceived as too high as demand for American goods shrank. Today most strikes that make the news are teacher’s unions and generally looked down upon even though these are the people teaching the next generation of Americans and American workers.

The history of organized labor in America is an interesting struggle of workers trying to get a fair wage for their effort. Six day work weeks and 100 hours of labor was not replaced with the ten hour day until the mid-nineteenth century. By the mid 20th century Americans were working a five day work week of 8 hour days. Unions drove for benefits like medical, holidays, and paid vacations. Today America works harder and longer for less and the middle class is rapidly shrinking.

Loomis gives a detailed history of the rise and fall of American labor.  It’s a seemingly permanent struggle to represent workers as a whole from the Wobblies to mine workers to the UAW against big business and at many times the government too. The struggle of American workers is more relevant when put into historical context than when it is captured with sound bites and demagoguery.  A well-done documentation of an under-represented sector of American history.