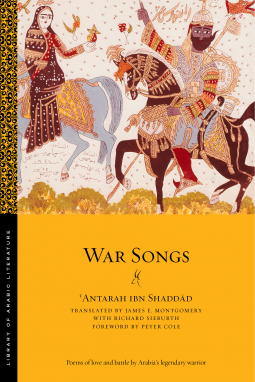 War Songs by Antarah Ibn Shaddad and translated James Montgomery is a collection of pre-Islamic poetry. Shaddad known as ʿAntar was a pre-Islamic Arab knight and poet, famous for both his poetry and his adventurous life. Montgomery is Sir Thomas Adams’s Professor of Arabic. He studied Arabic and Ancient Greek at Glasgow University, spent two years on an unfinished DPhil at Oxford, where he was a Snell Exhibitioner at Balliol College before taking up a lectureship at Glasgow. Senior Lectureships at Oslo and Leeds preceded his move to Cambridge in 1997.

‘Antar plays the role of an Arab Beowulf. He is a warrior who lives for battle and destroying his enemies. He is also a poet that unlike the poetry of WWI turns battle into a romantic act. War and battle became a religion which he participated in with zeal.

nobles like this are fair game
My spear mucked him up.
He did not look so fancy
laying there, a feast for night
predators ripping him from head to wrist.

ʿAntar faces death as a challenge not as fear:

I went face to face with Death
up close, with only a shield and a burnished saber
to keep us apart.

Peter Cole (Yale University) provides a detailed introduction into Arab poetry and translation and discusses the challenges of the translation not only in language but in time bringing the 6th century into modern form. The introduction provides a detailed history of not only ‘Antar’s life but also a history of the Arabian peninsula.  ‘Antar is not only famous as a warrior but also as a mixed-race hero.  He is one of the three black ravens in pre-Islamic history — a poet warrior of a black, Ethiopian, mother who was a slave.  ‘Antar, himself, was born into slavery but earned his freedom through heroics in battle.