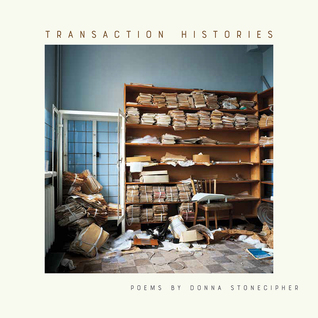 Transaction Histories by Donna Stonecipher is a series of six poems of several sections. Stonecipher is the author of three books of poems, most recently The Cosmopolitan (2008, winner of the National Poetry Series). She graduated from the University of Iowa Writers’ Workshop, with an MFA in 2001. She completed her Ph.D. in English and Creative Writing at the University of Georgia.

Transaction Histories delivers an exciting collection of observations and bits of news. The color blue and water in all its forms are present and run through the entire collection. The sea, rivers, snow, coastlines, and an infinity pool are all represented. Water is the ban of developers as nothing can be built on it. Later we are reminded of the plastic island in the Pacific the size of Texas, and it is countered with:

The plastic owls had been manufactured to scare away other
birds, as if wisdom itself were frightening — and indeed it was.

The language is crisp and filled with images:

In the photograph there were long rows of hooded horses, their eyes like great dark
romantic marbles glistening out into the unromantic crowds.

The images reflect back and forth through the poems and form connections to the past. Views change as a gardener, artist, and a veterinarian discuss the best places to live. This is countered later by travelers who arrive in a foreign city looking to eat and find the same selection of restaurants they had at home, except with the if one found one’s self at a particular restaurant in India.

Even as we sat watching the sunset, somewhere a lamp was turning into an antique somewhere a sofa was converting from bad taste to good taste.

It also changes what people value:

A lot of people seemed to like to go to the New York Public Library, establish themselves at a desk surrounded by books, and spend all afternoon stroking their smartphones.

Stonecipher takes the reader on a journey from Persian carpets, to the (loosely translated) Encyclopedia of Bad Taste, and Snow.  Between each section is are two short poems call “Landscape” and “Portrait” which offer a view of art from the past and waste from the present.  A stark contrast between the past and present.  The past and present and people and things come together to compliment and contract each other. An enjoyable and thought-provoking collection of modern poetry.