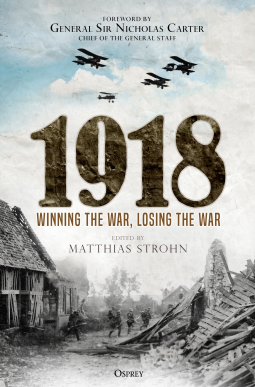 1918: Winning the War, Losing the War edited by Matthias Strohn is a collection of essays on different aspects of the final year of World War I. Strohn was educated at the Universities of Münster (Germany) and Oxford. He has lectured at Oxford University and the Joint Services Command and Staff College at Shrivenham. Since 2006 he has been a lecturer in the Department of War Studies at the Royal Military Academy Sandhurst, and in 2011 he was also made a Senior Research Fellow at the University of Buckingham. He holds a commission in the German Army and is currently a member of the military attaché reserve.

Strohn gathers together lecturers and senior military officers to examine the last year of the war. General Carter opens the book with the essential lessons of the war. From reviewing coalition warfare then and now, maneuvering, adaptation, and innovation, these themes are the turning points in the war. Morale of the troops gains new perspective after the near-disastrous mutiny of French forces in 1917.

Each major force is examined in their strengths and weakness of during the last year. Germany who mastered the use of rail to supply troops and material to the front now sees rail stations coming under attack delaying soldiers and supplies. Britain, the dominant naval power of the time, kept its Grand Fleet in port for most of the war. Germany, likewise, kept its surface fleet in port. Brief battles by small naval forces in the Pacific and Atlantic. But, for the most part, the war remained a land war.

The US entrance into the war changed several things. The US was the industrial leader in the world. It is interesting though that the US contributions to the war in were steel, oil, and other materials. The US did not produce a great deal of armament or planes. Instead, they relied on other countries to produce with their raw materials. Fresh troops from America also filled in for countries that could not meet the recruitment needs. Germany had no such luxury, and its allies were effectively out of the war by 1918.

Technology is also covered in the book by various countries. It is stated that the war started as a 19th-century war and finished in the 20th century. The evolution of aircraft was dramatic. The introduction of tanks changed the static trench lines. Artillery developed into an effective tool for warfare. Tanks and aircraft would play a primary role in the next war’s blitzkrieg. Close air support of ground troops would also be developed for the next war.

By examining each country and not excluding the Eastern Front and the fighting in the Middle East, which created borders that still that still present friction nearly a century later, 1918 gives a description how the war changed the world. Its effects were felt much deeper than just the Balkans and the Western Front. The Second World War and even the Cold War can be directly traced to the First World War. The use of different authors presenting different essay topics presents a clearer picture of the last year of the war. The reader has the opportunity to see different perspectives on the war. Each section is extremely well documented, informative, and easy to comprehend.