Book Review — The Coming Revolution: Capitalism in the 21st Century 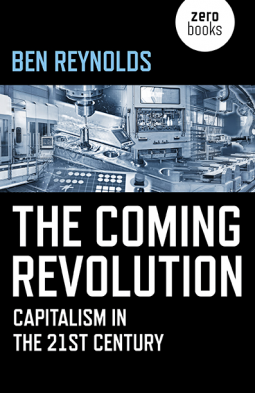 The Coming Revolution: Capitalism in the 21st Century by Ben Reynolds is the prediction of the fall of capitalism by its own means. Reynolds is an author and activist based until recently in New York City. His essays, articles, and commentary have appeared in ROAR Magazine, CounterPunch, Center for a Stateless Society, China-US Focus, and The Diplomat.

There can be no doubt that capitalism has raised the standard of living where it was practiced in some form. England grew into a world power. The United States followed. Now, China has reformed its centrally planned economy and is now the second largest economy on the planet. Capitalism does raise the standard of living for some. Capitalism relies on markets for goods, profits, and raw materials. It requires growth to sustain itself. Raw materials are creating environmental problems as well as a new wave of colonization. Profits are unevenly distributed. Markets become saturated and planned obsolescence creates repeat buying. Capitalism built a pyramid scheme and is running short of new ideas to keep it alive.

Reynolds looks at the history of capitalism and how mechanization has changed production. For example, the printing press was one of the most important inventions in history. It changed many things. Many more people had access to books. Literacy increased. The printing press did something that hand copied books couldn’t do. The price became cheaper after producing the first book. Once the type was set many copies could be produced with very little labor. Certainly less labor than copying a book by hand. The printing press ultimately was responsible for creating unemployment. There is little argument against the printing press; it’s good certainly outweighs any negatives. Today, it is even better. E-books allow publishers to create a single file and replicate it without any effort.

Automation is one of the areas Reynolds examines and its effects on workers. Machines produce more and more products without human intervention. 3D printing is adding another level to automation. It will just be a matter of time before items can be cheaply printed in metal and other materials. Factories would only need to be supplied with raw materials. The costs for producers would drop. Aside from not requiring human employees, factories would not need to be heated, cooled, or even lit.

Reynolds does examine economic theory in this book. From the efficiency of industrialization, the centralization of workers and capital, and even the internet have changed how the economy works. In 2015, MP3 sales overtook CD sales. This is significant because reproduction and distribution of MP3s require almost no cost. The is no physical product to distribute. A Chinese company has begun computer printers using cement and waste to build prefabricated housing at a rate of ten houses in twenty-four hours. The revolution that Marx predicted might just be an evolution. The efficiency of capitalism and (computerized) industrialization is changing the world economy. American industrial production has not decreased as commonly believed, it has increased, but uses far less labor.

As of 2012, almost 80% of US employment is in the service sector. Employment in the industrial sector has dropped. Farm employment has also declined with large-scale farms and automation. The service sector employment will soon drop too with automation. As retail moves online and warehouses become more and more automated, there will be even less demand for labor. Although more is being done with less labor, products have to be bought. If no one is employed, no one has the money to purchase the goods being produced. This creates an interesting dilemma. A well-written history and projection of capitalism and hope for the future without revolution.