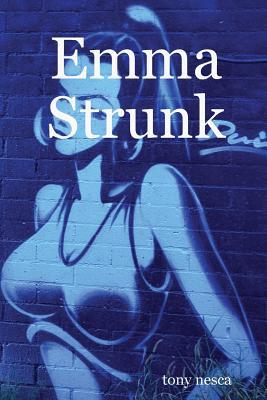 Emma Strunk by Tony Nesca is a novel written in verse about life in “peg zero.”  Nesca was born in Torino, Italy in 1965 and moved to Canada at the age of three. He was raised in Winnipeg but relocated back to Italy several times until finally settling in Winnipeg in 1980.

Peg Zero is a semifictional Winnipeg and a Winnipeg without any “win.” The collection of poems strike many cords and possible influences. There is the grittiness of Herbert Selby Jr. The drug-induced frenzy of Lou Reed and, too, a bit of the wild side. There is also the looming dread of the future from a Joe Strummer London filled with squatters. There is that feeling that many who grew up in the big cities in the 1970s remember — some nostalgic and some foreboding. It is real and not the sugar-coated sitcom of “Good Times”. Nesca captures that feeling through the lives of several characters all trying to survive knowing the future is bleak.

Our narrator leads us through the lives and relationships of several intertwined characters. Reggie is from Barbados:

Emma Strunk is a brutally honest look at inner-city life.  Although dark there are moments of light like Mike and Laura in the park two weeks free of crack and planning for a better tomorrow.  Peg Zero, however, is much like a singularity.  A black hole that the residents circle on the event horizon.  Unable to escape the gravity, they exist in a limbo knowing the only way out is through the black hole and no one survives that trip. The verse adds to the feel much like lyrics add to a song.  Although dark and even depressing at times the reader will be drawn into the story and the characters.  It is an immersion into life in Peg Zero and the reader will feel compelled to follow.