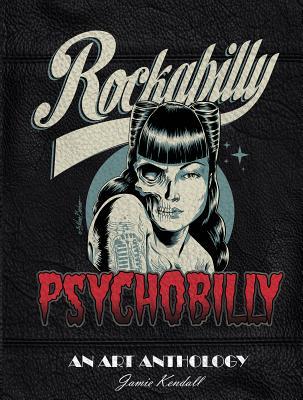 Rockabilly Psychobilly: An Art Anthology by Jamies Kendall is an illustrated collection of art from posters, movies, album covers, and just plain art. Rockabilly and its followers are described by Kendall as:

Rockabilly is the country boy pluckin’ away on his banjo, who gets off at the bus station and plays a few dive bars with such feeling that it compels people to get up and shake a leg (in a way those classically trained boys never could).

She’s that scrappy urchin chasing chickens and climbing trees, who grows up, fills out, gets her hair did, and before you know it, flyboys are painting her on the nose of their planes.

I believe the great appeal of modern rockabilly culture is that, at its core, it’s a working-class, people’s renaissance.

Psychobilly is more of the same but includes a bit of horror in the form of animated zombies, ghouls, and werewolves. Both contain women who as mentioned above would be right at home on a nose of a WWII bomber. The men sport pompadour ducktail haircuts and leather jackets. There are plenty of hot rods and more than a few motorcycles in this alternate reality of the 1950s. Kendall presents music choices to accompany your reading or rather viewing. Bands range from Stand up bass to Queen (yes, Freddy Mercury’s band). Psychobilly includes The Reverand Horton Heat to the Nekromantix. The music adds to the feel and the variations in themes.

Kendall knows his stuff and writes an informative introduction and occasionally adds comments to the art.  He is also the voice and guitar of the psychobilly band Batmobile. Also listed are the websites of the artist used in this collection for the reader after more art or more information.  A great collection of (warped) 1950s America captured in art and music.