Book Review — The Decline of Democratic Society in the New Age 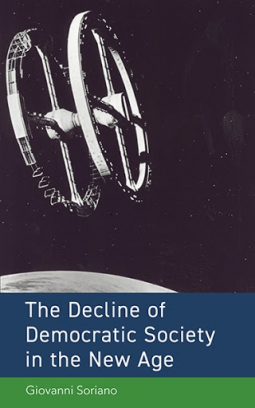 The Decline of Democratic Society in the New Age by Giovanni Soriano is an examination of the failure of democracy in the modern world. Soriano was born in Toronto, Canada, and received his B.A. from the University of Toronto. He currently lives in Italy.

Although the book examines democracy around the world, it leans heavily on the United States. The US is still the worlds only superpower and draws heavily on its military as an instrument of its policy. This is at odds with the idea that democracies are less willing to go to war than authoritarian governments. The will of the people somehow gets lost in special interests and money despite elections. American elections seem to have the mentality of a sporting event or other form of entertainment. Much like a football game, people chose sides for a variety of reasons, even if its just to support the winning side. American politics is much like the game. It is sponsored by advertisers — corporations, interest groups, and the rich. Unlike the football game, the “sides” here represent the interests of the voters. In America, the difference between sides is small on the political spectrum but filled with hyperbole making each side seem a world apart from the other. Personally, I noticed the system has been even more simplified by colors. Either you are red, or you are blue. The different colors make it seem like each side is the opposite side of the spectrum.

Soriano presents several interesting concepts. He is for the common man and wealth redistribution. If the trillion dollar bailout were split between the adult population of the US instead of a handful of corporations, much more would have been done to stimulate the economy. He opposes open borders because it cheapens the cost of labor, lowering the standard of living. He speaks out against the shareholder whose job is to collect a profit. That profit does not come from paying workers better but from outsourcing and moving industry outside the home countries borders. On social issues, he speaks against the gender categories greater than two and sex changes which seem to androgenize society.

Further, he disagrees health care is a human right. Agree or not with Soriano he does create a paradox in the American system. How can one pick and choose liberal and conservative themes; Americans tend to think of them as package deals.

Soriano also ties in the hidden fascism not only in the corporate control of the government but in what people expect. To continue my sports analogy, you want your team to be the strongest, have the best players, and crush all opponents; also you want to show your superiority. The US has a great deal of pride in its military and military power. Now we have a president who wants to hold military parades, something very closely resembling the two biggest totalitarian governments of the 20th century. The US spends more on defense than the next eleven countries combined, yet we see ourselves poorly equipped for war and accuse the other party of being weak on defense. This is also a country where the debt to GDP ratio is over 100%, and almost half the population lives at or near the poverty level. Money is America’s culture. We do not care for traditional culture. Architecture is reduced strip malls and cookie cutter houses. History of places we used to know has been replaced with money making changes.

Soriano includes the gold standard, stock markets, China, Russia, The FCC Fairness Act, media ownership, and terrorism in this book. The collection of essays offer outsiders look at America and different view of worldwide capitalism. It is a view from outside the arena if bread and circuses. Whether one agrees with Soriano or not, he does offer plenty of food for thought.