Book Review — Archaeopteryx: Book One of The Albuquerque Trilogy 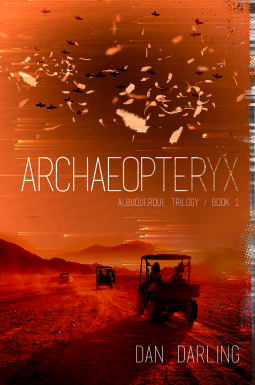 Archaeopteryx: Book One of The Albuquerque Trilogy by Dan Darling. Is a story that centers around John Stick, a zookeeper, and the very private life he tries to live.  Stick also suffers from gigantism and his elongated body stands eight feet tall.  His closest friend is a research scientist who suffers from large tumors on one side of her face.  They both lead separate and very private lives.  She calls Stick to investigate the sudden death of thousands of birds in a New Mexico refuge.  The concentration of the physical deformities of the two characters is a bit overplayed.

There are several other colorful characters.  Two of them are Sticks male friends from childhood one of them wants him to join the border patroling Minute Men another person tries to connect him with the Good Friends — anti-minutemen, if you will.  There is a private detective who seems to have stepped out of film noir.  Also, there are a variety of genetically engineered creatures and an evil corporation.

I did finish this book and unfortunately, it did not live up to my expectations as a thriller.  There is quite a bit happening and it all seems to trod along while not quite coming together.  The characters although distinct do not seem to create a bond with the reader.  Some may enjoy this series but wasn’t quite there for me.