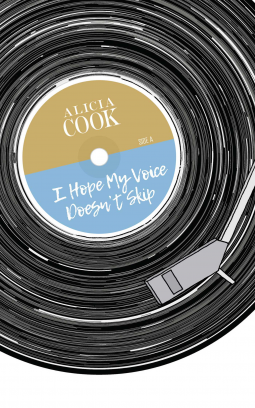 I Hope My Voice Doesn’t Skip by Alicia Cook is the Poets second complete collection of poetry. Cook earned her Bachelor’s Degree in English Literature in 2008 and her MBA in 2012. She is employed as the Associate Director of Communications at Saint Peter’s University. Cook is a freelance writer for multiple publications and a content writer for The Asbury Insider. She is also an activist fighting the heroin epidemic.

This is the second collection of Alicia Cook’s poems I have read. The first being Stuff I’ve Been Feeling Lately. Like that book, I found the first section much better than the first. The first section of this book consists of poems that are longer and better written than the current tended of “internet sensation poets” but have the same message that may seem a bit trite to mature readers and readers of poetry. To keep with the poet’s musical theme most of the first section, EP, is bubblegum pop music. That is not to say that they are all trite. “Sunday Morning Cartoons” and “I Am Sorry for Your Loss” carry a strong message but seem more like musings than poetry. “The ’90s Seem So Long Ago” is the hit in this first section. Although I am not nostalgic for the ’90s I feel the same about the ’70s.

The second section titled LP is the album rock of the collection and varies between rock and arena rock. What initially impressed me in this collection were the links to the poet reading of her poems. This is especially helpful in learning how the poet reads her poems, rhythm, speed, infections. However, the links that are active, before the release, are by cafe/folk style musicians singing the poem, or is it now a song? It’s a nice touch but not a poetry reading; it does, however, keep with the musical theme of Cook’s collections. The two poems that stood out were “Ten Little Girls”, which is the rewording of “Ten Little Indians”, and “Transitions”. “Transitions” stands alone as being a well written traditional poem in this collection.

Again, Cook provides hit and miss writing for me. Where she writes poetry she writes well. Most of the collection seems to follow along the lines of the current trend of young “poets” that write feelings without form. I understand the popularity of this writing with the younger generation’s preference for brevity in communications and society’s sound bite attention span. Cook can write poetry when she wants to. I just wish she would concentrate more on writing poetry.