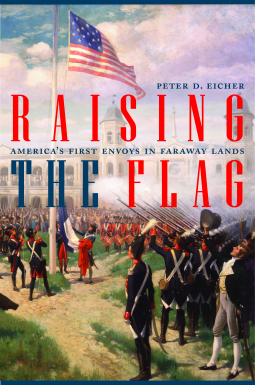 Raising the Flag: America’s First Envoys in Faraway Lands by Peter Eicher is a study of early American diplomacy. Eicher is a retired U.S. Foreign Service officer who served in Europe, the Middle East, Africa, and the Pacific. He specialized in political affairs, particularly human rights, conflict resolution, and international organizations. Eicher is the editor of “Emperor Dead” and Other Historic American Diplomatic Dispatches and Elections in Bangladesh, 2006–2009: Transforming Failure into Success.

For most people, it would seem that the United States lived in an isolationist vacuum from its independence until its entry into World War I. However, the United States was quite involved in European affairs as well as the rest of the world. The United States needed to establish trade and trade relations. Private citizens were used ad the first representatives of the US government. There was no real state department. At the time, the diplomatic staff of the US consisted of seven clerks who spent much of their time copying texts. The delays in relaying messages also created an almost independent representative of the nation.

Samuel Shaw was responsible for setting up trade with China after Independence. The American ship “The Empress of China” a comparably tiny ship set off to trade with China in attempts to secure tea for the newly independent country. Tea was important enough to travel halfway around the world. Shaw established trade which eventually led to trading American ginseng to the Chinese. The trade did grow to a sizable amount and eventually, furs replaced ginseng as America’s main export to China. Opening trade may not seem like a sizable event in history, but it also led to four other events. First, it minimalized several European nations role in China. Secondly, it led to the near extinction of American ginseng. Third, the fur trade led to the development and establishment of an American claim on the west coast. Finally, sandalwood trade to China led to the US presence in Hawaii. A simple trade arrangement had deep and lasting effects.

Diplomacy also led to America’s first foreign war and the establishment of a standing navy. Any Marine can tell the story of Lieutenant Presley O’Bannon and the efforts of the Marines in the raising the American flag for the first time in the Old World at the battle of Tripoli. Eicher adds to that story with the diplomatic and logistical background of the war as well as clearing up some misconceptions. The Marine’s role was to escort the American representative and commander of the American mission Willian Eaton — the first example of the Marines role in protecting American delegations and embassies. A fascinating story and an early example of the United States taking a role on the Old World stage.

Eicher tells the history of entanglement of the United States in European affairs. The purchase of the Lousiana Territory which is often covered as a simple agreement between France and the United States runs deeper with Spanish intrigue and some irony. The United States did not have the money to purchase the territory and received a loan from a British bank. That money, in turn, went to France to fight the British.

American representative covered the earth and carried out US policy. Sometimes that led US representatives to create American policy. Raising the Flag covers the US diplomacy in Latin America, Africa, and the Pacific. It also covers something taken for granted by most Americans, The Americanisation of California and the West coast. America existed in the world and owed much of that presence to independent American citizens representing American interests and many times their own financial interests. A well written and very informative history of early American diplomacy.