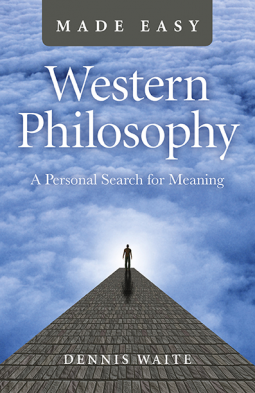 Western Philosophy Made Easy: A Personal Search for Meaning by Dennis Waite is a survey of Western thought. Waite has been a student of Advaita for over 25 years and lives in Bournemouth, England. He has authored several books on Advaita, most recently the revised edition of The Book of One, and he is a trustee of Advaita Academy, UK.

Waite is a student of Hindu philosophy and one of the classic Indian paths to spiritual realization which makes him an interesting choice to write a book on Western philosophy. Waite suggests that many people turn to philosophy when life is not going well for them. It is an attempt to find direction or redirection in one’s life. I studied political philosophy in college and graduate school so there is some crossover for me in Rousseau, Hegel, and even Plato and several missing in this work like Machiavelli. My own thoughts on philosophy are to find the why or how things are or should be than a personal direction. I tend to think there is a difference between philosophy and religion.

Waite does give a good summary of the history of philosophy and covers the major players in thought throughout European history. Although only briefly covered, Waite manages to give the high points of each philosopher. It may be a single idea or statement without much supporting material but it is done well enough for the reader to understand. The book offers a starting point for the novice and enough information for the reader to branch out on his own further reading.

What makes this book more than a survey course in philosophy is the second part of the book. This section covers Key Issues — Morality, Free Will, Belief, and Consciousness. Waite uses the previously discussed philosophers to try and find answers and meaning to key issues.  The conclusion covers happiness and what it really means.  I do find his prejudgement of the reader a bit irritating:

Since you ‘chose’ to read this book, I suggest that there is
a high probability that you are not happy! It is an undeniable
fact that the majority of people today are dissatisfied with what
they perceive as being a mediocre existence.

Perhaps most read philosophy because “an examined life is not worth living.” Some readers just want to know more, to see how man’s thinking of himself and the universe has changed.  Philosophy is a system of logical principles used to reach a conclusion  (I think, therefore, I am.). Waite seems to blur the lines between philosophy and religion is work, but that may be more of his personal philosophy.  A good primer on Western Philosophy.