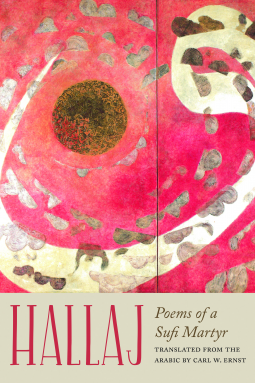 Hallaj: Poems of a Sufi Martyr by Husayn ibn Mansur Hallaj and translated from the Arabic by Carl W. Ernst is a collection of 117 poems by the Persian mystic poet. Al-Hallja lived from 853 to 922 AD. He was executed for proclaiming, “I am the Truth.” The phrase was interpreted in two ways. The first as a mystic who annihilated his ego which allows God to speak through him. Others say this as a claim that he was divine. The later having the power had him executed.

The poems are translated by Carl W. Ernst who is the Kenan Distinguished Professor of Islamic studies at the Department of Religious Studies at the University of North Carolina at Chapel Hill. Ernest provides both a detailed introduction, which covers more than enough ground to allow a novice to understand the poet and a very detailed section of notes, cited sources, and break down of the poems. The poems are categorized by subject allowing for an easy grouping in English. The groupings include conventional love poems, mystic love poems, martyrdom, riddles, and, perhaps the most interesting, metaphysics among other titles. Each poem is prefaced by a few sentences or more to put the poem into proper context. A lone couplet needs some background to understand its importance. Other introductions explain the cultural or religious importance of the poems.  For example:

This poem presents an anthropology describing, first, the elemental and
material human body, then the luminous spark that is divine.
Body like a temple, luminous of heart,
spirit that’s eternal, devout, wise,
he returns with the spirit to its lords,
but the temple remains rotting in the dust.

The work of al-Hallja opens the world of early Islamic culture to the West.  He predates the popular Rumi by three centuries and can be used to see the evolution of Islamic culture.  The Sufi search inward for God.  They believe that in destroying one’s ego one can talk through God.  It seems to be a compliment to Buddhism in practice but not dogma. Perhaps translations of Islamic poets can help others see that Islam is a religion of peace.  Al- Hallja is an enlightened writer and poet who practiced and wrote inside of his faith.  The use of God by the poet seems to fit many religions view of God and peaceful existence. A great collection for those interested in not only poetry but culture.