Leary’s influence in art, culture, and politics throughout the 1960s was
wide-ranging. While President Nixon accused him of being out to corrupt
the nation’s youth into drug taking, many within the counterculture saw
him as a visionary, who presented an alternative path to human fulfillment
and harmony through consciousness expansion and the rejection
of game-playing. However, for Leary himself the close of the decade
was to see the limits of his vision decidedly challenged by the system. 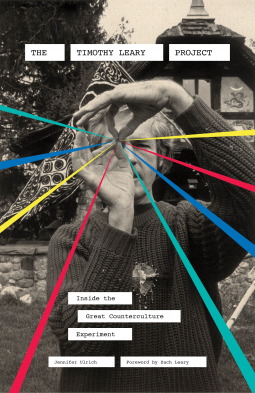 The Timothy Leary Project: Inside the Great Counterculture Experiment is a biography put together by the phycologist’s notes, letters, and other documents. Jennifer Ulrich is the curator of the documents as well as editor and author of this book. Leary’s son, Zach, provides the forward.

Leary was ultimately known for the use of psychedelic drugs to increase human consciousness and experience. This work shows the transformation of a middle-class phycologist into the counterculture guru. Early correspondence is with Allen Ginsberg but is not limited to the Beat culture although it did offer a starting point for experiments and documentation. Leary conversed with others too like Carl Sagan.

Documents include “trip reports” from various volunteers. Leary turned to Albert Hofman, the first person to synthesize LSD and take it. Hofmann is also known for writing his experience of riding a bicycle while on LSD. Aldous Huxley is also a source of letters and information until his death in 1963.

Some space is given to Leary as a fugitive.  His 1965 Laredo arrest under the Marijuana Tax Act of 1937 lead to a conviction and a thirty-year sentence.  The Marijuana Tax Act was declared unconstitutional by the Supreme Court.  Although Leary was free, it did lead to the creation the DEA and federal controlled substance laws under Nixon.  Leary was arrested again in California in 1970 and sent to a low-security prison.  He promptly escaped and moved to Algiers, then Switzerland.  Returning back to Switzerland from Afghanistan he was taken into custody by US agents.  Governor Brown would later pardon him in 1976.  In an interesting change of events, Leary took to personal computers as his new savior.  In fact, one of Leary’s last acts was posting a recipe for an edible marijuana bud on a Ritz cracker.

An interesting look at Leary through his personal documents.  It’s not quite a biography in a traditional sense but an examination of personal papers.  A book for the reader with knowledge of Leary’s life and work but wants to see more of the original documents.

2 responses to “Book Review — The Timothy Leary Project: Inside the Great Counterculture Experiment”