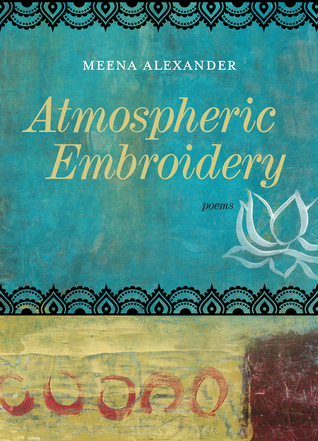 Atmospheric Embroidery: Poems by Meena Alexander is a collection of poetry reflecting on life on three continents. The poets earliest memories are of India and childhood. Later they move to Sudan and the violence there. Other poems reflect on her final stop — New York.

The poems are written in mostly a standard and recognized format. A majority of the poems are written in open couplet form without rhymes. This adds to the meaning and imagery presented. Halting the reader, pausing and then continuing even in midthought. Fourteen lines poems also make an appearance but do not have the rhyme scheme of a sonnet, but at first glance, the reader, like I did, might think it a sonnet.

The subject matter varies with region and with time. The images of death and violence on women are particularly played out in the poems about Sudan. “Nurredin” is an exceptionally well-done example with the violence obscured through a childlike vision. “Moksha” however, leaves little to the imagination with the actions of a Delhi rape gang. Like all our memories, the poet’s grows and things are remembered, remembered partially, remembered incorrectly, but add to our consciousness. All of the poems contribute to the four line final poem “Indian Ocean Blues.” A well-written collection of culture and cultural observations as well as violence in all cultures.