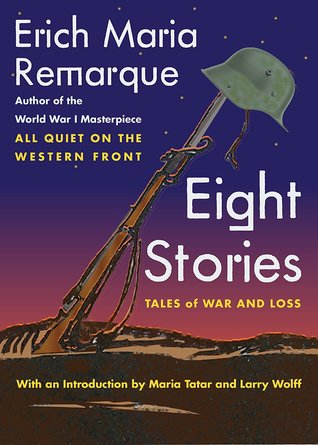 Erich Maria Remarque is best known for the masterpiece All Quiet on the Western Front. That book sold nine million copies in the US alone and has been translated into sixty languages. What is perhaps most remarkable about the book outside of its antiwar message is that it crossed national boundaries. Nations who soldiers fought the Germans now felt empathy for a German soldier. Remarque’s work is better known in America than the great British war poets who were our allies. The book and the movie was not popular with the rising right-wing government of Germany. Remarque moved to Switzerland in 1934 and lost his German citizenship in 1938. From there, he moved to Los Angeles and became a fixture od the social scene and often seen with Marilyn Dietrich.

These eight stories were published in Collier’s and Redbook between 1930 and 1934. The translator remains anonymous although there are ideas as to who did the translating. War is a terrible time for all involved and although peace was celebrated on November 11, 1918, the war went on for many for the rest of their lives. Remarque attempt to capture this in eight stories about German soldiers after the war. One story presents the effects of PTSD or shell shock as it was known at the time. A dramatic story that unfortunately aged well. One hundred years after World War I, we have many soldiers who still suffer from PTSD from recent conflicts. The flag waving and supporting the troops then, like now, only happens at the start of the war, not when broken bodies and minds return home. Some return home late improperly imprisoned in another country. News of their deaths arriving home many years before they do.

Memories of battles and bloodshed are remembered with the simplest pleasures. Moments away from the fighting where man appreciates the world. Moments when meeting the enemy and finding out they are the same, like us. Without weapons, the enemy is just people wanting the same things as everyone else — to return home, peace, and family. These eight stories do for the post World War I era what All Quiet on the Western Front did for war. Peace does not mean a return to normalcy. There is damage that has been done and has not healed. The land where the battles have been fought gradually heals back into farmland after it has been “mined” for buried metal. The men are not always so lucky. A powerful and timeless message for mankind as long as we continue to have war.