Book Review — The End of Chiraq: A Literary Mixtape 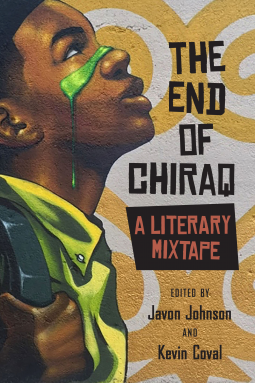 The End of Chiraq: A Literary Mixtape edited Javon Johnson and Kevin Coval is a collection of mixed literature describing the city of Chicago. Johnson is an Assistant Professor and Director of African American & African Diaspora studies and holds an appointment in Gender & Sexuality Studies in the Interdisciplinary, Gender, and Ethnic Studies Department at the University of Nevada, Las Vegas. He received his Ph.D. from Northwestern University. Coval was raised in the suburbs of Chicago and educated at Ohio University, the University of Wales, and DePaul University. His brave, socially engaged poems weave together personal experience and calls to action.

Chicago was, and to many still, a city of pride, industry, and innovation. Carl Sandberg coined it the “City of Big Shoulders”. It was to the meat industry what Detroit was to the car industry. It reversed the flow of a river to wash pollution away. The city physically lifted its city blocks to improve drainage and prevent flooding. Chicago was the midwest New York City — Education, Art, publishing, sports, museums. The city had it all. In 2016 Chicago again entered the news as Candidate Trump made the murder rate a political issue to the point of wanting to send federal troops into the city.

Chiraq is a contraction of Chicago and Iraq. It signifies the violence in the city.  Early on it is pointed out that in 2008, 314 soldiers died in Iraq and 508 people were murdered in Chicago. To further add to the statistics the City of Chicago spends 40% of its operating budget on police. Chicago also has the most militarized police forces in the country yet as violent crime has fallen all over the country it is rising in Chicago.

The contributors write in factual prose, narrative prose, poetry, and in rap. Hip Hop had a revival in Chicago in the 1990s and 2000s and that is brought up by several contributors. Kayne West, Chief Keef, and King Louis are all mentioned at various times. Spike Lee’s movie Chi-Raq receives an unfavorable critique by many for what is called “Willie Horton marketing.” Spike Lee should have stuck to writing about areas he knows about. One comment read to the effect that the use of the play Lysistrata might have been fine for Greek comedy but should not be repurposed on this side of 300BC.

Writers in this collection turn to treating the cause of the problems in the city. The city and its police force attack the symptoms and at times over aggressively when gunning down unarmed men. Schools are being shuttered and mostly in poorer areas. Race is an issue in a highly segregated city. It plays its part in education and opportunity. For the vast majority, being born poor means a lifetime of poverty or alternatively crime and gangs.

The editors assemble the book as a mixed tape from the 1980s. Various prose forms are mixed with poetry and lyrics.  The mixed tape format of the book is compared to the mixed tape.  It is a collection of freedom.  It is not one album played in order.  It is a kind of democratization where the user determines content and order and not a record company.  This, of course, was in the days before streaming and shufflable playlists and perhaps a nostalgic view of what Chicago used to be — a diverse, progressive city of industry, art, education, and freedom.  A strong message from the people of a strong city.