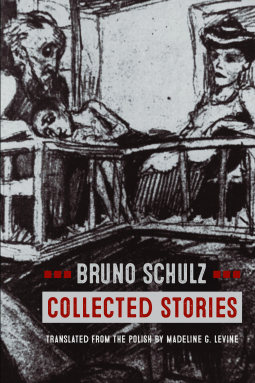 Collected Stories by Bruno Schulz is a collection of short stories comprised of two published works and additional uncollected stories. Schulz was a Polish Jewish writer, fine artist, literary critic and art teacher. He is regarded as one of the great Polish-language prose stylists of the 20th century. In 1938, he was awarded the Polish Academy of Literature’s prestigious Golden Laurel award.

There are two things that make this collection great. The first is the writing style. Schulz is perhaps the only readily known Polish modernist in the West. It takes only a short time before the reader is drawn into the minds of the characters. The settings gain importance over the concept of plot and are rich in imagery. The imagery is not only found in the great things but also in the mundane like fish in aspic. The characters get the same treatment:

What remained of him was a small amount of corporeal casing and that
handful of senseless eccentricities—they could disappear one day, as unnoticed
as the gray pile of trash collecting in a corner that Adela carried out
every day to the garbage bin.

The second thing that makes this collection significant is the translation work by Madeline G. Levine. Levine is Kenan Professor of Slavic Literatures Emerita at the University of North Carolina, Chapel Hill. Her translations from Polish include The Woman from Hamburg and Other True Stories by Hanna Krall, Bread for the Departed by Bogdan Wojdowski, and four volumes of prose by Czesław Miłosz. The introduction documents the checking and rechecking by another party of the translation. The goal is to capture the essence and accuracy of the original language. The proper use of translation, even if sometimes unwieldy in English or using words that are not in common use, like hill-lock hump, adds depth and accuracy to reading and concentrates the reader’s effort and attention.

Collected Stories offers the reader a look inside of Polish fiction of the modernist period. There are many similarities in the writing to Woolf’s later poetic prose. Stream of consciousness plays out through the stories. As many of the stories take place in the past, the effects of memory play an important role in the storytelling much like in Proust. Talking to an acquaintance who was born and raised in Poland, Schulz is wonderful and read by most in high school. After reading this collection, I would definitely agree with the wonderful.