Chester Rowell, civic leader, speaking
about farmworkers in the Fresno Republican: “The main thing about
the labor supply is to muleize it . . . The supreme qualities of the laborer
are that he shall work cheap and hard, have no union, have no ambitions
and present no human problems . . . Some sort of human mule, with the
hibernating qualities of a bear and the fastidious gastronomic tastes of
the goat, would be ideal, provided he is cheap enough.” 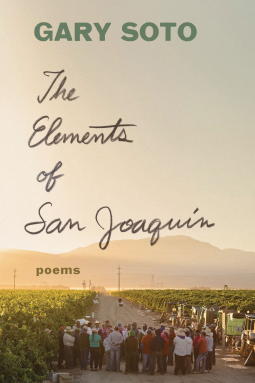 The Elements of San Joaquin by Gary Soto is a collection of poetry originally published in 1977. Soto, poet, essayist, and playwright, is the author of dozens of books. His New and Selected Poems was a finalist for the National Book Award. He has received fellowships from the National Endowment for the Arts and the Guggenheim Foundation.

Soto writes with simple words that carry deep personal meaning. Growing up in places like Fresno, Stockton and other places in the San Joaquin region brings a certain feeling of poverty, tradition, family, and a richness that develops from the three. Soto’s writing of life in the 1950s and 1960s is one memory of a sometimes bleak existence without bitterness. When it’s all you know it becomes the norm rather than impoverishment. Not having food and needing to hunt frogs or fish from the canal becomes an adventure with his brother. Nature seems to consist of ants and mice rather than animals most would think to remember. Working the land had a certain pride to it that meant something to those who worked the hoes. The environment no matter how harsh it seems is offset by growing up in a poisoned environment. The poison is manmade. DDT and other chemicals cover the fruit they pick and eat and it infiltrates the entire environment.

Soto’s, work updated and revised, carries the message it did in the 1970s. He was a writer and in an almost forgotten term Chicano. His work is a tribute to those who worked the land and lived in poverty to provide food for those who lived a much better life. It is a tribute to the hard work, the loss, and the moments of joy in a simple life; moments that most would not find memorable or even special.  Well constructed and well thought out poetry about those who are underappreciated in our society.