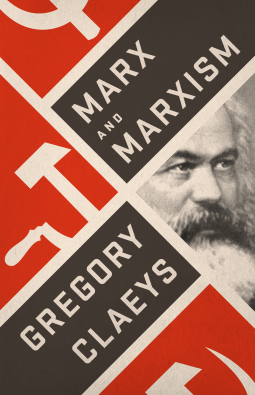 Marx and Marxism by Gregory Claeys is a detailed study of Marxism in historical context. Claeys is Professor of the History of Political Thought at Royal Holloway, University of London and author of books on British intellectual and political history. He gained his Ph.D. at the University of Cambridge, where he studied at Jesus College.

Marx is a dirty word in America. It is tied to socialism, the Soviet Union, and North Korea. Socialism is seen as stealing wealth. It is hated except for public roads, police, fire departments, the standing military, and farm subsidies (that make food cheaper than market value). Granted, public schools, welfare, libraries, and the arts are often targets. Rationalized, justified, or just ignored the goods of socialism that make the nation work are pushed aside.

Claeys does something that needed to be done for some time. He wrote a book on Marxism that puts Marx (and Engels) in historical context. Nineteenth-century capitalism in Europe was not a good thing for the vast majority of the population. Overworked, subsistence pay, child labor, terrible and dangerous working conditions, made life, for most, dreadful. Conditions were so bad that pro-slavery forces in America’s south used the English factory system and conditions to defend the humanity of slavery. Slaves were fed, housed, cared for (to some extent) and factory workers were left to starve and die. Of course, it was propaganda but propaganda with elements of truth.

Marx is put into his place in history. His intention was not a Soviet system. He did not want to care for the poor, but rather abolish poverty. His desire was to create a system where men were equal. The exploitation of the working class was real. Unskilled labor flooded into the cities for factory work. The glut of labor allowed the system to continue. Workers were not organized; they were expendable.  Marx went much farther with theories on private property and alienation.  Alienation is the removal of a person from their work.  The factory systems put people in positions were their work was not a whole.  Piecemeal work created separation from the product.  No longer did one build something completely; he built part of something in exchange for money.  He sold his time.

Marx also believed in education.  If one was a child of a cobbler, one would grow to be a cobbler.  The problem comes when there are too many cobblers and not enough tailors.  The idea that education could be used to train workers to learn multiple skills and work where needed.  Of course, Marx did believe that man would rise to the challenge and become a willing part of a community where all is shared and all contribute.  Unfortunately, this was not the case.  To correct these problems various versions of Marxism evolved after his death.  Since Marx saw the industrialization of the economy the mechanism for change, he thought his theories would come to play industrialized countries, namely England.

Where Marxism took hold, however, was in peasant class societies like the Russia and China.  Hence, Marxism became Leninism and then Stalinism in Russia and Maoism in China.  Did Marx have an effect in industrialized countries?  Yes and a very big influence.  Organized labor challenged industry.  The “Spectre of Communism” brought change.  Rather than risk revolution and lose everything, industry bent.  Leisure time, safe working conditions, collective bargaining, end of child labor, limited work weeks all became a reality.  Workers enjoyed more than they ever had before.  Western Europe began adapting ideas that became Democratic Socialism.

Marx and Marxism is a very readable account of Marxism in history.  It discusses the complete theory and the evolution of the theory in easy to understand way.  Unlike the complex writings on Leninism, Marxism is fairly easy to understand without dumbing it down as it usually is in contemporary America.   All the controversy is included in this work and presented in an accurate way.  It is not a propaganda piece praising Marx but an honest examination.  Very much worth reading for anyone with an interest in history or political science.