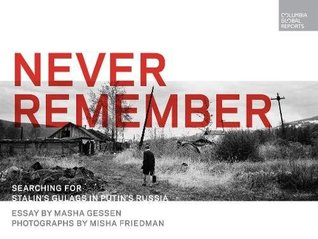 Never Remember: Searching for Stalin’s Gulags in Putin’s Russia by Masha Gessen is an attempt to remember a painful part of Soviet history. Born in Russia, Masha Gessen immigrated to the United States as a teenager with her family to escape religious persecution. Since that time, she has become an international journalist who writes for both Russian-and English-language publications. She returned to Russia to work as a journalist there but left again in 2013 to avoid anti-gay legislation.  She has earned the National Book Award for nonfiction, 2017, for The Future is History: How Totalitarianism Reclaimed Russia.

The book begins with the search for Raoul Wallenberg,  a Swedish prisoner, that existed in a Heisenberg state of being neither alive or dead. Soviets unconvincingly claimed he was dead. Sweden (and CIA) believed he was still alive with multiple sightings of the prisoner from Siberia to a mental hospital in Moscow. Wallenberg disappeared from Hungary after the Soviet occupation in World War II. Previously he was responsible for saving Jews from the Nazis. The search for him or more likely his remains, he would be 104 today, is still uncertain.

Alexander Solzhenitsyn’s The Gulag Archipelago brought back the concept of Soviet prison camps to the West’s memory.  Earlier Stalin’s modernization of Russia was praised by many, not knowing that the labor was forced. The gulag system grew under Stalin.  It was a tragedy committed against his own people.  Soviet citizens were convicted in courts that the legitimacy of law or justice never appeared.  This system has been effectively removed from history under Soviet leaders following Stalin and now in Russia under Putin. Gessen wants to bring back the truth and the memory.

Glasnost began in 1985 and opened some of the KGB files. Local organizations, called Memorial Societies, began forming and looking into the past trying to bring back a picture of the Gulag system that exploded under the Stalin regime. Efforts to uncover the history and extent of the prison camps were stalled with the fall of the Soviet Union in 1991. Societies searched for bodies, execution sites, and identification. Death certificates rarely truthfully revealed the cause of death and place of death; some do indicate execution as the cause of death. Veniamin Iofe and Irina Flige of the Leningrad Memorial Society search the system and fight to gain information still closed to the public.

Stories of prisoners are included in the work. Sergei Kovaliov details his five-year imprisonment starting in 1975. The rules were excessive and impossible to follow. They were used for the most part to ensure that there was an infraction on whoever was chosen for punishment. Modern day attempts to open museums to allow people to remember the past has been difficult. Putin’s political crackdown stopped much of the progress. Much like some explained slavery in America as humane — food, clothing, shelter, and even Christianity. Currently, Russia is doing the same with its own black mark on its history. Museums show improvement in prisoner care such as the evolution of beds from planks making the environment more comfortable and humane for those serving time for crimes real or imagined.

Never Remember also contains photographs by Misha Friedman.  These pictures capture the memory of former camps and pieces of evidence that remain of the system.  This book is an attempt to emotionally connect the reader to a past that has been suppressed.  Visually and literally stunning work.