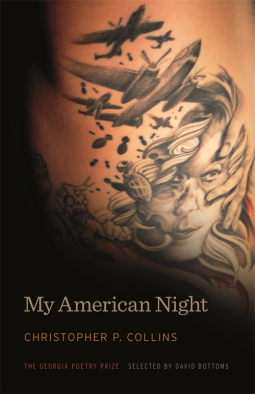 My American Night by Christopher P Collins is a collection of wartime poetry. Collins is a former military officer and a twelve-year veteran of the U.S. Army Reserve, having completed three overseas combat deployments in Afghanistan and Iraq. He is the 2015 winner of Farmingdale’s Paumanok Poetry Award and has published one poetry chapbook, Gathering Leaves for War.

World War I was the last war that members of the military wrote poetry in great quantities. The poetry started as inspirational with thoughts of glory, duty, and honor and ended with despair, senselessness, and the waste of a generation. World War II did not inspire poetry in any great measure and neither did Korea nor Vietnam. There was a divorce between poetry and war much like life and death. A clear line had been drawn as killing became mechanized.

Collins brings back war poetry, but fighting the enemy is not the central point of the poetry. It is the individual battle in the soldier’s mind that is exposed. Rather than glorifying war, the message is a father caught in war and seeing and causing the deaths of others children:

I cannot cauterize
the memory
of your legs shredded,

the thick femoral
blood spraying
upon fatigues,
my sand-caked palms.

There is no escape from the war as Collins insists throughout the collection. In tents, letters from home do not offer an escape because are stained with CLP. The mention CLP takes me back. I can still smell it even after being out the Marines for three decades. CLP (Cleaning Lubricating Protecting oil) has a distinct smell to it that many veterans remember as easily as the smell of coffee.

“Child of Chicken Street” is an especially moving poem. There is a duality between the children in Iraq and Afghanistan and Collin’s own child. An examination of the differences of life and death between the worlds of existence. There is a violence and a crudeness on one side of the war zone and the caring protective parent on the other side. This exists in geography as well as in the mind of the soldier in combat. Each side makes a deep mark in ones thinking and removing one is impossible after witnessing it and removing the other would make one less human. A startling collection of poetry and a collection that speaks strongly about war and what it does those in it and those trapped by it.  Imagery that anyone one who has served will appreciate and eye-opening to those who have not.