Book Review — Pearls on a Branch: Arab Stories Told by Women in Lebanon 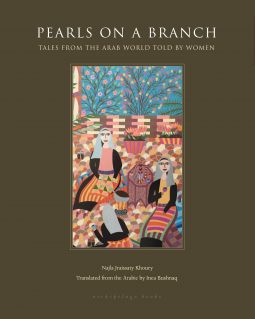 Pearls on a Branch: Arab Stories Told by Women in Lebanon Today by Najla Khoury is a collection of Middle Eastern stories. While civil war raged in Lebanon, Najla Jraissaty Khoury traveled with a theater troupe, putting on shows in marginal areas where electricity was a luxury, in air raid shelters, Palestinian refugee camps, and isolated villages. Their plays were largely based on oral tales, and she combed the country in search of stories. Many years later, she chose one hundred stories from among the most popular and published them in Arabic in 2014, exactly as she received them, from the mouths of the storytellers who told them as they had heard them when they were children from their parents and grandparents. This is a collection of thirty stories.

Where I grew up in an ethnically diverse Cleveland, Ohio. Many of my friends’ grandparents did not speak English. As a kid, I knew basic greetings in Polish. I also learned stories that were not the typical Hansel and Gretel or Little Red Riding Hood. Stories that held a moral and were somewhat magical. Animals talked to people. People talked to spirits. Animals had their own societies. Princes abounded. Wicked people, trolls, and spirits had their place. These stories were told and told again for ages. Not all of the stories were written down. But then too in an era with three channels of television stories had a bigger role than they do today.

Khoury captures stories of the oral tradition of the Middle East. She has a method of collecting stories and does not take them on the first listen. She wants to make sure that the stories are true to their form and not influenced by mood or other factors. She wanted to get as close to the traditional story as possible. Strict cultural norms are allowed in stories. Evil spirits, talking animals, immaculate conceptions, and women with more freedom than usual or even taking mocking advantage of men are allowed. Fiction presents a break from reality and an openness in a mostly closed culture.

Many of the stories presented are unique. In several, however, I did pick up on stories I have heard before. The details are different but the story is the same. Either this is the commonality of people or people trading stories and stories adapting to their own culture.  Our “Once upon a time” is replaced with a more appropriate “There was or perhaps there was not.”  Each story usually has an introductory poem to set the stage for the story too.  The stories are clever, some humorous,  and contain a moral without any heavy handiness.  This is entertainment carried down from the past in the oral tradition.  Having these stories in print is a way to keep the stories alive and available in an age of on-demand television, movies, music, and entertainment.