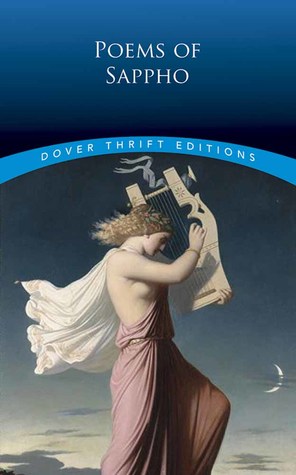 Sappho is perhaps the greatest poet who we know so little about. She was born around 615BC on the island of Lesbos into an aristocratic family. She was married to Cercylas and had a daughter named Cleis. Many know her by the for her sexuality modern words of Lesbian and sapphic are connected to her. This part of her reputation seems to be connected to a play written three hundred years after her death. In that play, she is portrayed as a promiscuous lesbian. In 1073 Pope Gregory had her work destroyed based on the portrayal in the play. Others had a different view. Plato called her the tenth muse and her likeness appeared on coins. He claimed she was beautiful while others called her “very ugly, being short and swarthy.” Regardless, her poetry was very popular in her time.

This collection is a reprint of the 1912 publication translated by John Maxwell Edmonds. In the last one hundred years, we have found more fragments and poems by Sappho but nowhere near the complete nine volumes. Edmonds explains in his introduction that Sappho ran a school for young women teaching singing and the choruses of the maidens used in marriage ceremonies. Book IX, in particular, speaks of the wedding ceremonies. One theory is that Sappho’s lesbianism may have just been the male voice in wedding choruses. With so little known about the poet, it’s really difficult to make a solid claim. Most claims one way or the other were made long after her death.

The fragments and poems in this collection are all the ones that were available in 1912. What was discovered of her work is presented in this edition? Some words are filled in but well noted by Edmonds. The words flow well but being fragments it can be frustrating reading. Complete poems are a joy to read:

The moon is gone
And the Pleiades set
Midnight is nigh;
Time passes on,
and passes, yet
Alone I lie

There can be little doubt of the popularity of her work in ancient times. That popularity continues into modern times. Although new materials have been found, this collection presents the vast majority of the work (and new information for its time) and has been translated by a respected translator of ancient Greek.