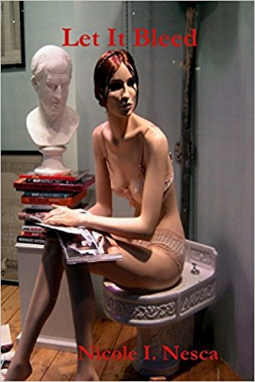 Let it Bleed by Nicole Nesca is a collection of prose and poetry. Nesca was born in Ohio. She developed a love of music, painting and writing early on and continued that love throughout her adult life. While living in Canada, she completed her first three works of poetry and prose collected in the anthology piece, KAMIKAZE WHITE NOISE, and her latest release of poems, Diamond Scarred Alley. She has been published in several E-Zines and has been a part of two anthologies.

Nesca grew up about an hour down the road from me and a decade later. The first thing I noticed about the prose writing is that a decade apart in Northern Ohio is not significant. For me, it was a trip back to the late 70s and early 80s. Little King’s, swimming in a quarry, and purple microdot survived the gap in years. The industrial city with the hit and miss job of steel in my city auto plant in hers is ever present. Then there is the music, The Stones, Bob Dylan, Pink Floyd, Bruce Springsteen (including a story based on his worst line), and Patti Smith (tick tock tick tock f*ck the clock). The prose is blue-collar Ohio youth. Things sucked but there was always some kind of hope of getting out and living better. Sometimes we do get out and find it’s not that much better even as we get older. Nesca describes this effect perfectly in “The Bus.”

The poetry is gritty and in some cases self-critical. Body form, age, loss, and hysterectomy are repeated topics in the poetry. Losing a sister to drugs and a friend to drowning shows how tough life can be. Now living in Winnipeg, Nesca describes how Canadain friends talk about Americans, Trump, and the uglier aspects of their southern neighbor. She hears the full force of it from people who do not realize where she is from.  The problems, however, are not only limited to America.  Even Canada has its homeless struggling to get by.

Nesca writes with a mix of prose and poetry.  Her Northeast Ohio roots show through and are as easily recognizable as someone’s Brooklyn accent would be.  Let It Bleed creates a snapshot of youth and the present.  Perhaps it is a reminder that “we have one last chance to make this real .”