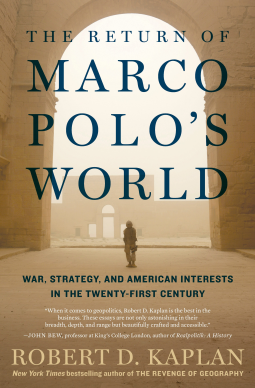 The Return of Marco Polo’s World: War, Strategy, and American Interests in the Twenty-First Century by Robert D Kaplan is a collection of articles on foreign policy. Kaplan is an American author. His books are on politics, primarily foreign affairs, and travel. His work over three decades has appeared in The Atlantic, The Washington Post, The New York Times, The New Republic, The National Interest, Foreign Affairs and The Wall Street Journal, among other newspapers and publications. His more controversial essays are about the nature of US power and have spurred debate and criticism in academia, the media, and the highest levels of government.

In the world of foreign policy, there are two camps. The realists are based on nations acting in their own interests and closely associated with Kissinger in Us policy. The liberal camp believes in collective actions and policies based on generally held beliefs like human rights. In American thinking, it is closely tied to Woodrow Wilson and international cooperation. Without the slightest bit of doubt, Kaplan is a realist. A rational thinking realist, but still a realist. He makes a point of describing the biggest flaw in the liberal theory when points are made on moral or ethical grounds there can be no opposition or variance — if you do not act to stop genocide, then you support genocide. There is no in-between position.  It is a difficult position to hold and defend in a world where everything is not black and white.

Kaplan pictures Europe fracturing and unruliness moving in. In France, there is a rise of the National Front. In Germany, there are more incidents of right-wing extremism. These are popular movements by those fearing immigration, job loss, and identity. Eurasia, meanwhile, begins to strengthen using technology, globalization, and geopolitics. Globalization leads to the weakening of culture and religion. This affects different countries differently. In the Middle East, it has met with violence and radicalism. Other areas are taking advantage. Given to the title of this book, China is trying to build a new silk road: Harbors and high-speed rail in Pakistan and railroads and highways in Africa. Trade and trade advantage has become the goal of China. Iran is also in a position to become a regional power, but declines to do so because of the religious leadership sees integration into the capitalist systems as a treat to Islamic ideology. China traditionally deals with all regimes, good or evil. It takes a true Machiavellian stance in its foreign relations. China changes as the situation changes.

The rest of the book is a collection of previously published articles covering issues from Trump to the growing limitations of the US military.  Kaplan explains drone attacks are not a sign of American strength, but a sign of its limitations.  The US uses drones to knock out targets without engaging military forces against the threat.  It hopes to end problems by picking off parts of the problem.  The US does remain the undisputed maritime power in the world.  Able to sit safely off coasts and strike inland with missiles and aircraft. American maritime power also tasks itself in ensuring sea lanes are open and the supply of petrochemical are available to allies. Something China enjoys without cost.

Kaplan uses current and past foreign and domestic issues to build upon his thesis.  Of course, one can argue against any of his positions as well as for them.  This is something I recall having to do repeatedly in graduate school — defending and rejecting the same piece of policy.  Kaplan defends his position well and although holes can be found in his thinking, they are very small holes in the big picture.  Kaplan presents a thoroughly researched and thought out position on foreign policy.