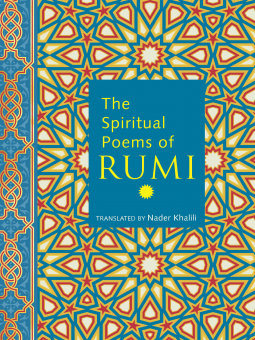 Rumi was a 13th-century Persian, Sunni Muslim, poet, jurist, Islamic scholar, theologian, and Sufi mystic. His influence transcends national borders and ethnic divisions: Iranians, Tajiks, Turks, Greeks, Pashtuns, other Central Asian Muslims, and the Muslims of South Asia have greatly appreciated his spiritual legacy for the past seven centuries. He also has the title of the best selling poet in America.

Rumi was a believer in music and dancing to help open the mind to create and for getting closer to God. God is liberally used in the poetry and the Prophet is also mentioned a few times. What is interesting though is that God used in the poetry is all encompassing and welcoming spirit. Perhaps closer to Norman Greenbaum’s “Spirit in the Sky” than any dogmatic religion. The use of wine is also something that is not frowned upon. Rumi seems like a mix of the Beats and the Hippies but in a much more idealized way. He is not the one copying others but the one being copied imperfectly by others.

in the blackest
of your moments
wait with no fear

The poems are arranged with one or two on each page. The pages are trimmed with traditional Islamic art done in watercolors giving it the appearance of a religious text which goes well spiritual nature of the poems. The book can be opened anywhere and read and reflected on.

This translation is by Nader Khalili (1936–2008) was a world-renowned Iranian-American architect, author, humanitarian, and teacher. Khalili was also the founder and director of the California Institute of Earth Art and Architecture (Cal-Earth).