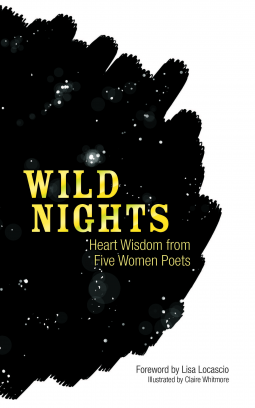 Wild Nights: Heart Wisdom from Five Women Poets is a collection of poetry stretching from ancient times to the 20th century. Lisa Locascio provides the introduction and biographies of each of the poets. She holds a Ph.D. in Creative Writing and Literature and MA in English Literature from the University of Southern California, as well as an MFA and BA from New York University.  Illustrations in this collection are by Claire Whitmore

Wild Nights is a collection of selected works of Sappho, Emily Dickenson, Amy Lowell, Sara Teasdale, and Edna St. Vincent Millay. Each of the women contributed their own style to poetry. Sappho is presented first and is translated by a few different people in this collection to bring balance between the older ideas of Sappho and the newer thinking. Her poems, however, have survived only as fragments. Dickenson offered sharp observations and first-person accounts that were unique in American poetry. The opening lines of one of her unnamed poems gives the title for this collection.

Amy Lowell wrote for only a dozen years near the turn of the twentieth century yet produced 650 poems. She wrote with what she called “unrhymed cadence” that she saw well suited for the English language. Her opening poem “Fireworks” seems to be far more modern than its time. Sara Teasdale was a master of the lyrical poem:

The world is tired, the year is old,
The fading leaves are glad to die,
The wind goes shivering with cold
Among the rushes dry.

Our love is dying like the grass,
And we who kissed grow coldly kind,
Half glad to see our old love pass
Like leaves along the wind.

The final poet is Edna St. Vincent Millay. Her work combined the modernist attitude with traditional forms creating a new type of American poetry. She is also credited as one of the best sonnet writers of the century. Both Millay and Lowell won the Pulitzer Prize for their poetry.

Despite the stature of these poets, their work is easy to read and understand. Formal terms lyrical poems and sonnets shouldn’t scare off readers.  The reader can follow along nicely learning as they read.  Wild Nights is not only a tribute to women poets it also offers novice readers a starting point in real poetry without intimidation.