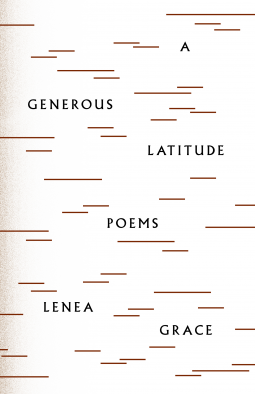 A Generous Latitude: Poems by  Lenea Grace is the poet’s first collection of published poetry. Grace’s work has appeared in Best New Poets, The Fiddlehead, Washington Square Review, CV2, Riddle Fence, Grain, and elsewhere. She is a graduate of McGill University, University of Maine at Presque Isle, and The New School. Grace is a founding editor of The Mackinac poetry magazine. She grew up in Texas and Oklahoma, spending her summers at Long Lake and John Island in northern Ontario. She lives in Gibsons, British Columbia.

This is quite an interesting collection of poetry and covers nearly a decade of published work. One thing is clear Grace loves Canada and the summers she spent there. I have lived in Texas for the last thirty years and can understand her love for the north. Leaving Texas in August and spending two weeks in along the coast of British Columbia changes one perspective. It’s a completely different world.

Several of her poems are about the experiences of growing up. Although I probably have two decades on her, there are many similarities between that span the decades to include Carling Black Label. Those red and black cans made many a night memorable along with the music — the stereo sounds of Van Morrison, Jackson Browne, and

“Yukon River” brings back memories of the past. “Highway 17” reflects the freedom of travel and the leaving of the familiar and trespassing onto others land, passing towns, abandon towns, and the slightly absurd restaurant that serves both “Chinese and Canadian food.” It is the adventure of growing up and the first tastes of freedom. “Hitchhikers,” likewise, combines the excitement and caution of being on one’s own. With freedom comes relationships too.

Some experiences are different like “Faceblue” which examines social media and some people’s need to photograph everything they eat to everything their cat does. Other poems break things up with random topics. However, most poems reflect on that golden period of young adulthood where the world stretches out before us with promise and excitement. A well-done collection.