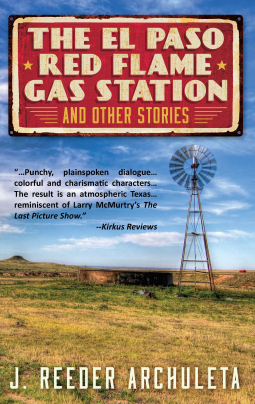 The El Paso Red Flame Gas Station and Other Stories by J Reeder Archuleta is a collection of eight stories rural West Texas. Archuleta was raised in far West Texas and a child of five previous generations of West Texans.  He is also the author of the novel Rio Sonora.

These stories span twenty or so years from the mid-1940s through the Vietnam War and take place in West Texas, the Panhandle, and Odessa. West Texas is a bit like Mayberry in that the townspeople look out for one another. It is also a bit like the wild west with drinking, fights, and a bit of lawlessness that gets overlooked. It reflects modern Texas with its pride in military service and high school football.  In fact, football has a position almost on par with the military. Football stars are heroes.

What ties this collection of short stories together is that they center around a boy named Josh. Josh is introduced as a young boy, the son of a poor couple traveling West Texas looking for work. Josh moves around and establishes himself in town. He is liked and trusted. It is not an easy life for Josh without any family to support him. Members of the town help in different ways and provide a safety net for the boy as he grows up. Life is not easy and but it is West Texas and nothing comes easily to anyone.

A well-done selection of stories that reflect changes in a boys life and changes in rural Texas.  The characters in the stories are believable and likable (or unlikeable depending on the situation).  The stories are plain-spoken but run deep.  This is an enjoyable piece of Americana that has long passed into history.  It will be a pleasant bit of nostalgia for some, and for others, it is a look back into what life was like in rural America.